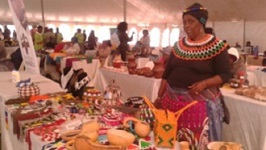 ZIMBABWE – Despite some improvement in the ease of doing business in Zimbabwe this year, the business environment remained subdued with some industries shut or operating below capacity, forcing the government to revise downwards its economic growth forecast from a projected 3.1%to 1.5% this year.

The majority of business operators say the year 2015 was one of the worst in years.

He said in-fighting and instability in the ruling Zanu PF was also a cause for concern for business in the country.

Mugaga added that Zimbabwean businesses continued to face stiff competition from imports and this resulted in loss of jobs.

The July High Court ruling, which gave express powers to employers to fire workers on three months’ notice, resulted in the loss of thousands of jobs in the country.

President of the Confederation of Zimbabwe Retailers, Denford Mutashu, said 2015 was a challenging year for most businesses in the country.

Mutashu said despite the prevailing harsh economic environment, they managed to stay afloat and are optimistic that business in the retail sector will pick up in 2016.

Even small businesspeople, like Patience Zhou, said business has been low throughout the year with most people surviving on buying on credit.

However, Mugaga and Mutashu said it’s pleasing that government is taking steps to improve the ease of doing business in the country.

Mugaga believes that this is the best way of stimulating the economy.

He added that Zimbabwe could be on a good path to recovery as both business and government are now working in harmony.

Zanu PF activist and young business woman, Evelyn Pande, said though the year was tough, there are signs that full implementation of President Robert Mugabe’s 10-point plan will improve the business environment.

The 10-point plan focuses on adding value to natural resources to get maximum benefits, black economic empowerment and the creation of business links with various nations.

Zimbabwe this year jumped to 155 out of 189 nations on the World Bank’s Ease of Doing Business after government embarked on reforms to amend laws that scare away investors.

However, the much-feared regulations compelling foreign-owned firms to part with equity stakes of 51 percent remains intact with indications that there is discord in the government on changing the Indigenization and Economic Empowerment Act to accommodate cowered foreign investors.

To ensure competitiveness of the local industry, government has engaged a French company, Bureau Veritas, to stop the flow of substandard products into the country.

Zimbabwe in November also reached a debt payment agreement with the Breton Woods Institutions to settle its $1.8 billion debt and experts say this could result in the country accessing cheap money from international institutions to boost collapsing industries.