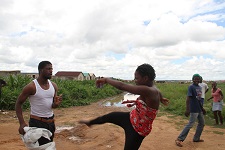 Tendai Munyoro, 31, was left for dead after Mary Mujuru – a sex worker – attacked him with stones accusing him of getting sex services for free for two months.

Other sex workers started a war in support of Mary after concerned residents tried to stop her from fleeing.

Tendai lay helplessly on the ground after being stoned on the spinal cord by Mary rendering him impotent while sex workers-residents war degenerated into fist fights and mud wrestling.

As he lay helplessly following the attack, Tendai, whose wife died a year ago, said he regrets meeting Mary and was in the process of applying for a protection order against her.

“I met this woman recently, we have been having sex while I stayed at my home in Stoneridge and she had her own place. Trouble started when I tried to end the relationship.

Mary however had a different version saying Tendai had promised to take care of her and convinced her to stop prostitution but hell broke when she found him with another woman.

“He is not telling you the truth. He made me quit my job (prostitution) yet he has been failing to pay rent and provide my basic needs. Then just this morning, I found him with another woman that is when I demanded my money for the services I have provided for the last two months.

“I know I was wrong to attack him but believe me I was very angry that he had moved on to get another woman while he had made me stop having associations with men who would paid me for sex.

“I’m not proud of what I did but he should also stop this habit of expecting to get sex for free. By making me quit my job (prostitution), I thought he will pay my rent and buy food yet he just wanted to have free sex,” she argued.

Mary’s friend also reiterated the same accusing Tendai of getting free sex for two months and trying to evade paying.

More drama was to follow as residents forced Mary to disembark from a commuter omnibus after she tried to leave the scene.

The residents blocked the commuter omnibus and ensured that Mary didn’t leave the place. Upon disembarking, Mary started to attack one man who had called her a prostitute arguing that the man had no right to call her that as she had never slept with him.

The argument degenerated into a fist fight after Mary’s friend challenged the man to a fight. “Musandibate regai ndirove munhu, anotaura zvechihure akambo rara naye here. Arikumuroverei,” shouted the sex worker as she jumped to assist her friend in the fight.

The unidentified man also started attacking Mary after his duel with her friend.

Tendai was rushed to hospital by his relatives who passed through Mbudzi Police station to report the matter while Mary and her friend were taken to the same police station by another vehicle.

Sex workers yesterday turned Southlea Park into a war zone fighting a non-paying client. Tendai Munyoro, 31, was left for dead after Mary Mujuru – a sex worker – attacked him with stones accusing him of getting sex services for free for two months. Oth...
Share via
x
More Information