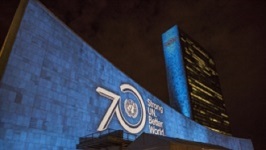 The SDGs are a global initiative that builds on the eight Millennium Development Goals established in 2000.

Fischer Chiyanike, president of the United Nations Organization-Zimbabwe, told VOA Studio 7 the country has identified some of the achievable goals that can be initiated and implemented by communities.

“We have come up with seven priority SDGs for the next five years although these SDGs were declared (for implementation) in the next 15 years. These are critical SDGs in Zimbabwe.

“Number one, our focus is on the eradication of poverty, (SDG) number two focuses on food security, number five is gender equality, number six is on water and sanitation to provide clean water in Zimbabwe, then number 13 is on adaption and mitigation on climate change, number 16 is on peace building and governance and number 17 is on means of implementation involving financing and development all these SGDs.”

He said these goals can be implemented through utilizing some of the lessons of the MDGs.

“It will be difficult if we do not use some of the recommendations that were made at the Rio [De Janeiro] 2012 Summit … We agreed that we were going to engage the grassroots … In Zimbabwe it can be difficult to implement the goals as we need food on the table but we need to engage people at this initial stage so that no one will be left behind.”

He noted that the development model that should be utilized in implementing these SDGs should be based on strategic community engagement and not a top down decision making process in which the state and civil society impose ideas on local people.

The 17 Sustainable Development goals which target poverty, hunger, quality education, gender equality, climate change action to peace, justice and strong institutions are on target for the next 15 years or 2030.

ZIMBABWE - An organization fighting for community empowerment says Zimbabweans should spearhead the implementation of the Sustainable Development Goals (SDGs) adopted by the United Nations General Assembly last year. The SDGs are a global initiative that ...
Share via
x
More Information