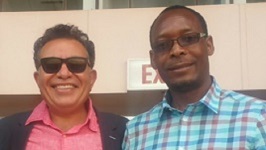 ZIMBABWE – ZIFA presidential candidate Trevor Carelse Juul says if elected he will work with former players and football administrators to improve the standard of soccer in Zimbabwe.

He tells Studio 7 there is no way one can bring sanity to Zimbabwean football without engaging all-stakeholders.

“We (his former Zifa board) have already laid a foundation. Before the late Majuta Mpofu (former Highlanders dribbling wizard) died we had put a plan together to revitalize Inguboyenja Club, Iminyela Hall near White City Stadium. Gibson Homela had come to work with us as well and these are the old players. I saw some more players in Bulawayo this weekend when I visited the city, Johannes Tshuma who was my goalkeeper at my Eagles and later Highlanders.

“These are people who are all struggling without jobs. July Sharara phoned me the other day, Peter Antonio … These great players and we forget all about them. There is no hall of fame in Zimbabwe, we need a hall of fame.”

Carelse Jull further noted that there was need to support the Mighty Warriors and revamp soccer in general in Zimbabwe.

“One of the things I want to get to immediately is a program for our ladies, our women who have qualified for the Olympics. These are wonderful girls. We want to support them as much as possible. I am going to make sure that there are coaching programs, to look at a situation in which there are in camp for months preparing for the Olympics so that we are competitive.”

Carelse Juul said he wants to ensure that the Young Warriors are also given a chance to participate in international tournaments as a way of grooming youngsters for the national soccer squad.

At the same time, the former ZIFA boss said he would explore ways of ensuring that many local players secure contracts in top flight soccer clubs in Europe and beyond.

He said such players would boost the national team, which normally fails to make it to the top due to lack of experience and creative soccer stars.

“We have a number of Zimbabwean players whether there were born in Zimbabwe or born by Zimbabwean parents who are already playing in some of these clubs. We have got Macauley Bonne of Colchester who has just scored four goals, there is Galloway playing for Everton.

Bonne scored a goal when he featured for the first time in Warriors colours in a friendly match against Morocco last year. He has been doing well in his club.

Nineteen-year-old defender, Brendan Galloway has also impressed in his several appearances as left-back in Everton so far this season.

Carelse Juul will battle it out for the ZIFA presidency with businessman Phillip Chiyangwa, former Warriors kingpin James Takavada and Dynamos secretary general Leslie Gwindi, who once held a similar post in ZIFA.

ZIMBABWE - ZIFA presidential candidate Trevor Carelse Juul says if elected he will work with former players and football administrators to improve the standard of soccer in Zimbabwe. He tells Studio 7 there is no way one can bring sanity to Zimbabwean foot...
Share via
x
More Information