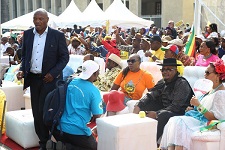 ZIMBABWE –  something that almost did not happen — Tourism and Hospitality Industry Minister Walter Mzembi and his foot soldier the chief executive officer of the Zimbabwe Tourism Authority (ZTA) Karikoga Kaseke, sure pulled off a miracle.

Kaseke’s two million people claims are also an exergeration, but a sign that indeed Harare did come to a standstill last Saturday as people — young and old — converged on the streets of the capital city for the Harare International Carnival Street Party.

In the absence of professional estimates, large crowd counting always poses headaches for both organisers and commentators — proper figures will always be difficult to get and so Kaseke can get away with his claims.

Sugar Chagonda, the ZTA corporate affairs manager says, “We were pleasantly surprised by the numbers that came in for the street party”.

“Our researchers are finalising everything from the carnival’s impact on business to close enough estimates of the actual carnival arrivals. We estimate that they were in excess of two million,” said Changonda.

Tens of floats were exhibited, mostly music and dance, and people lined up the streets from Corner Rotten Row and Robert Mugabe all the way down to Angwa Street before taking a detour on their way to Africa Unity Square via Nelson Mandela Avenue.

As has become the norm, drinkers were free to party in the streets with no fear of being arrested by the police. It was indeed a jamboree, which the vast majority of local attendees still do not comprehend.

Zimbabweans, those who attended and the performers as well, still do not seem to know what a carnival is.

While minister Mzembi and Kaseke, their wives, and ZTA staff members seemed to know how to dress for the event, the other “two million” people looked lost, as if they just bumped into the festival without any prior knowledge. Indeed the carnival was a success not only in that it was held or attracted people from all corners of Harare and beyond — but in that it also had participants from as far as the Caribbean Islands, the United Kingdom and India.

However, there is a lot of work for Mzembi and team if this carnival is to realise its full potential.

Government through the Tourism Ministry and the Zimbabwe Tourism Authority has undoubtedly brought something new, refreshing and attractive to Zimbabweans — the carnival culture.

Last week, organisers of the Harare International Carnival (HIC) converged for a post mortem of the event and hopefully they did not get carried away by the congratulatory messages they received, but took time to introspect, identifying the weaknesses of this noble event and how to make it tighter and bigger next year.

Below are a few pointers on how Minister Mzembi and his team can improve the HIC.

Branding/Marketing
When soccer supporters attend a match where their favourite team is playing, they wear jerseys, scarfs, hats and bandanas with the colours of their team. Carnival-goers in other countries like Nigeria, Seychelles and Brazil — dress for the carnival. However, most people that lined up the streets of Harare last Saturday for the third edition of the Harare International Carnival, did not look the part.

A deliberate move to educate the public about the carnival should be undertaken through road shows and other outreach programmes prior to the event.

There is a notion that most of the thousands of people that thronged the streets just bumped into the event — they did not even know about it. Yes, they enjoyed the music and the parades but still went home without any idea what the carnival is or what it is about. The event was not well branded, it lacked colour, no billboards, no hype and no information for the ordinary man who finds newspapers a bore.

Corporate support
Where were our companies? With such numbers on the streets, surely that is a big enough audience for any serious company even the blue-chip ones to take advantage and sell their brands. If companies fight tooth and nail to advertise in a stadium, or during a particular match surely why would they not queue for Kaseke’s two million people?

Jah Prayzah, despite being the most sought-after artiste at the moment looked unremarkable in that dull truck, which had no deco whatsoever. Except for his dancers who were dressed in their usual camouflage, he looked like any other artiste ferried in a tasteless truck with no presence or character.

Lack of coordination
Why should the ZTA try to do most of the work on its own? Six weeks is a long time to stage an event while retaining the focus that is required. Because the carnival was too long, with events spread over several weeks, there was a clear sign of disjointedness.

There was no proper co-ordination. I doubt if there was a command centre where everything was run from.

According to one observer, aingova manjakenjake. Kaseke and team should take a cue from organisers of the Harare International Festival of the Arts.

Decentralisation
While it is a noble idea for people to gather in the city centre, there is need to have activities on the day of the City Centre Street Party in other areas like Avondale, Five Avenue Shops and its surrounding areas, Braeside Shops, and other shopping centres bordering the city centre. And by the way, there is no need for ZTA to run those mini street parties, all that is required is to give a go ahead, most shop owners wanted to be involved but did not know how.

The national art gallery should do something along the lines of the carnival, sculptors should be showcasing their wares at the Harare Gardens during the street party.

They were bundled together with adults, to watch the various floats yet they could have had their own fun elsewhere.
Over 50 kids were lost and found that day because their guardians had been busy watching grown up entertainment while the kids were bored. There is need for a kids’ corner, a street where jumping castles and waterslides are put up. Some ended up “swimming” in the water fountain in the Africa Unity Square – really? Is that what we want?

Portable toilets and Lighting
And next time please for the sake of our clean air put mobile toilets on the streets.

They are a necessity. Remember people were drinking alcohol freely on the streets. Those same people need to relieve themselves from time to time.

And the other thing – it is known that the country is hard-pressed because of power shortages, but a wapusa wapusa carnival is a no-no any day.

There is need for proper lighting of the streets and the areas where the passa passa parties will be held. If not for security then for the colour and brightness. A lot of shops were looted on Saturday and that should be avoided.

Warn motorists in advance
An announcement through radios, newspapers and television should be made to advertise alternative routes and warn motorists that certain roads would be closed on the day of the street party. There was a lot of agony on the roads on Saturday as motorists found themselves unable to navigate the streets yet they had not been warned.

Security
While it is not encouraged to have the Zimbabwe Republic Police or the Army on the streets on such a day, surely it would cause no harm to have the Municipal Police patrolling the streets, just to keep an eye on their city, after all, the Harare City Council is an important stakeholder of the carnival.

And lastly, just a word of advice — those Samba girls from Brazil are not meant for live performances on stage as we saw at Private Lounge. Those Samba girls are meant for the street and beach parties. Pitting them against stage maniacs like Bev and Zoey was just unfair — no wonder why our local girls stole the show.

Carnival: Good going but . . . lessons for Mzembi and team

ZIMBABWE -  something that almost did not happen — Tourism and Hospitality Industry Minister Walter Mzembi and his foot soldier the chief executive officer of the Zimbabwe Tourism Authority (ZTA) Karikoga Kaseke, sure pulled off a miracle. Forget Walter...
Share via
x
More Information
x