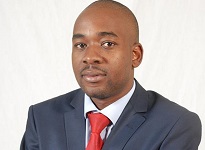 ZIMBABWE – As a political leader Tsvangirai should find better ways or policies that can support and complement Government programmes for development.

Recent reports in the MDC-T say party leader Morgan Tsvangirai is planning to discipline Mr Nelson Chamisa, who is allegedly leading a faction that is threatening the party leader’s position.

Tsvangirai’s authoritarian leadership has caused much havoc and confusion in that embattled opposition party.

What Tsvangirai is failing to realise is that his supporters are no longer interested in him. Most of them have shifted their political allegiance and confidence from Tsvangirai to Chamisa.

Evidently, in the eyes of MDC-T supporters Chamisa is now by far a much a much better leader when compared to Tsvangirai.

What the electorate need is a leader who can stand up for them and honour his election promises.

For Tsvangirai, it really boggles the mind how he fails to lead a mere political party, what more a nation. All he can do is to stir chaos both in his party and the country at large.

Recently, Tsvangirai called for mass protests in the streets. Honestly, someone should tell Tsvangirai he is groping in the dark.

Tsvangirai should learn from his earlier incidents that mass protests do not work in Zimbabwe. Unlike him (Tsvangirai), people of Zimbabwe refuse to be used as pawns by deadbeat politicians.

As a political leader Tsvangirai should find better ways or policies that can support and complement Government programmes for development. What the nation needs at the moment is economic recovery and nothing else.

It has been 16 years now since Tsvangirai’s battle to usurp power from President Mugabe and the ruling Zanu-PF party. For such a long time Tsvangirai has proved that he is ineffectual to win the battle against his biggest rival, Zanu-PF. His consecutive unsuccessful failures at the polls have provoked his traditional donors in the West to withdraw their financial support to his MDC-T party.

It is actually a pity that a person who has ambitions to lead this nation is financially constrained to an extent that he can’t even settle a $900 debt he owes to a Harare law firm (Atherstone Cook Legal Practitioners). The Western community who used to fund Tsvangirai saw that the man is bankrupt of ideas to effect regime change, and has become a liability.

Information from impeccable sources within the party has it that Chamisa now rules the roost. Because of his commitment and hard work towards party business it is noted that Chamisa has a large number of party supporters vis-a-vis Tsvangirai.

The electorate in that opposition party must think outside the box and consider voting for a new person who has an ear to hear their problems.

Surely, Tsvangirai has proved that he is self-centred. His glaring misdemeanuors against party officials is causing more divisions within the party.

Actually, party members and officials must not defend him even if he is criticised for his bad behaviour.

For instance, MDC-T Senator Mattson Hlalo was expelled from the party only because he is an ally of Nelson Chamisa. How can a party’s national council come up with such a shallow resolution?

With these expulsions, truly MDC-T is not a democratic party and never was. That party is a typical example of an autocracy.

Autocrats like Tsvangirai only believe that they have the monopoly of knowledge and therefore they alone should rule. For so long Tsvangirai has been stifling all his internal competitors who will then end up dumping him.

From the word go, Tsvangirai has been making his own decisions which are very dangerous for the development of that party activities and programmes.

Just a word of advice to Morgan before I sign out, one-way communication without feedback leads to misunderstanding and communications breakdown. It creates problems both with supporters’ morale and growth of the party in the long run due to their resentment.

ZIMBABWE - As a political leader Tsvangirai should find better ways or policies that can support and complement Government programmes for development. Recent reports in the MDC-T say party leader Morgan Tsvangirai is planning to discipline Mr Nelson Chamis...
Share via
x
More Information