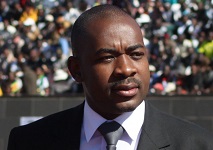 ZIMBABWE – Top opposition MDC-T politician and Kuwadzana East House of Assembly member Mr Nelson Chamisa, who is reportedly leading a faction seeking to torpedo leader Mr Morgan Tsvangirai on Monday made a thinly veneered dig at the latter saying he was running scared, barely a fortnight after a local.

newspaper reported him as saying his boss was “seeing shadows”.

Mr Chamisa posted a statement that, “The guilty are afraid but the innocent are courageous and indomitable!!!” on his social media page which his followers immediately situated in the internal fight within the opposition camp.

In the stream of comments to the post, Mr Chamisa’s supporters urged him on while some commentators appeared unhappy with the escalation of hostilities and Mr Chamisa’s increasing boldness.

One Kanye North Samaita said, “Noone will pull you down myldr (my leader) while Edwin Rutsvara said, “Keep calm wangu. Trust me the storm will be over sooner than you think. Stay quite (sic) and let them hallucinate”.

Tobias Tafireyi said “Age and time is catching up with them”, in apparent reference to the two protagonists’ future prospects.

Mr Chamisa is 37 years old while Mr Tsvangirai is aged 63.

An apparently miffed Darlington Mapanga challenged the legislator to come out in the open and declare opposition to the former trade unionist Mr Tsvangirai.

The apparent rift between Messrs Chamisa and Tsvangirai, one-time close allies until last year when the latter allegedly engineered the downfall of his former blue-eyed boy and prevented him from taking over the powerful position of secretary general at the party’s congress, was also highlighted in the pictures that Mr Chamisa posted on his social media over the weekend.

The pictures were taken at the launch of a book by Patson Dzamara, the brother of journalist-turned-MDC-T activist, Itai, who is alleged to have disappeared earlier in the year.

In the two pictures fraught with body language, Mr Chamisa is shown receiving a copy of the book while a stiff-looking Mr Tsvangirai looks smugly away.

The two men are separated by Mr Douglas Mwonzora, the party’s secretary general, who beat Mr Chamisa to the post but not without the alleged hand of the party chief.

Further, Mr Chamisa does not caption the picture to identify and acknowledge the presence of his leader.

Reports of a fallout between the two are increasing by the day, casting a possibility of yet another split in the opposition outfit.

It has been asserted that it is the leader who has blinked first.

Weekend reports said the “panicky” MDC-T leader had lined up a series of pre-emptive strikes to dilute power bases of his nemesis.

Reached for a comment on the developments in his party, Mr Chamisa, playing down the alleged rift, said he did not “see the fire” of the “smoke” of reports alleging a growing rift.

“My relationship with him (Mr Tsvangirai) is that of a father and son,” he said.

Zim Army ‘Threatens to Deal With Politicians Opposed to Mugabe’