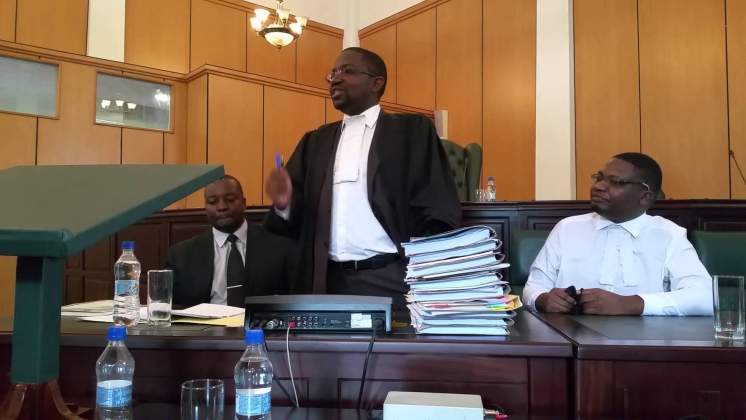 HARARE – MDC Alliance President Nelson Chamisa’s lawyer, Advocate Thabani Mpofu has been charged with obstructing the course of justice, a charge linked to the comments he made in September when a video meant to discredit abduction claims by three MDC Alliance activists was released.

In September, the State through the state television channel broadcast a video footage supposedly from Chicken Inn CCTV which they claimed to prove that Joana Mamombe, Netsai Marova and Cecilia Chimbiri had “faked their abduction.”

The video received so much criticism with others saying it was staged.

Mpofu commented on the video calling out Chicken Inn and alleging that they had participated in a “fraudulent effort” meant to discredit  victims of state-sponsored persecution.

“The problem with Chicken Inn is not that it released CCTV footage, rather; that it availed its name and facilities in aid of a fraudulent effort. This immoral, unethical and completely senseless gesture is what has appalled right-thinking people. Search your conscience Chicken Inn,” wrote Mpofu on this Twitter.

However, the State did not take any action then and many have questioned the timing of the charge which comes a few days after he made claims that Thokozani Khupe accidentally called him in need of assistance ahead of the recently held extraordinary congress.

Mpofu claims Khupe intended to call another Tabani Mpofu, who is the head of the Special Anti-Corruption Unit (SACU).

“The fact that I “almost” share a name with ED’s Tabani Vusa Mpofu has led to interesting confusion in the past. Today I got a call from Mama Khupe, wanting “my” assistance with the ongoing congress. I hope she finally managed to talk to the right person and was duly assisted,” said Mpofu.

Mpofu represented Nelson Chamisa’s MDC Alliance in their challenge against the 2018 Presidential election results in the Constituional Court.

HARARE - MDC Alliance President Nelson Chamisa's lawyer, Advocate Thabani Mpofu has been charged with obstructing the course of justice, a charge linked to the comments he made in September when a video meant to discredit abduction claims by three MDC All...
Share via
x
More Information