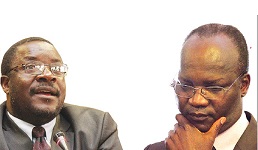 Moyo is believed to be the brains behind the ambitious G40 grouping opposed to Vice-President Emmerson Mnangagwa succeeding Mugabe.

In an unrestrained attack, Charamba said the G40 faction should start worrying about their careers,

accusing them of undermining Mugabe and pushing the succession narrative within the governing party.

“What they have to worry about are their own careers, not me,” Charamba said in a radio interview with ZiFM and SFM at State House in Harare on Wednesday.

“The President is not a character who rushes. He will allow you a very long rope, you go about enjoying meaningless headlines and thinking you are on top of the world, it will take just one afternoon.

“So watch it, there are many sinister minds that speak in the name of the President, who are in fact ‘successionists’ and it won’t be long before the headlines give you the story.”

Charamba repeated claims made by State media columnist Nathaniel Manheru – who in fact is widely reported to be himself – that the G40 was working with axed former Vice-President Joice Mujuru to topple Mugabe.

“Some have been meeting with the People First (PF), they are still in Zanu PF, but it won’t be long. That’s where that prophet or prophetess called Manheru becomes very useful,” he said.

Charamba, who is believed to have thrown his lot behind Mnangagwa, described the G40 members as “little men with absolutely no iota of history behind them thinking they can one day emerge as leaders of this country”.

“With their little minds and [they] think baldness is age, it isn’t,” he said.

“There is one tragedy of those little fellas, and I call them little fellas, they confuse media skills with social skills. They think they can scale up the political ladder by tweeting without knowing they are tweeting themselves to eternity.”

“(They think) when you manipulate one or two headlines you have a social base for launching your stupid ambition,” the presidential spokesperson said.

He did not hide his displeasure at the G40 members, whom he accused of discussing Mugabe’s tenure yet they were his juniors.
“Does that make sense to you? And this is exactly what makes me angry and when I point that out, they give you a faction,” Charamba thundered.

The livid Charamba accused the G40 members of leaking confidential politburo minutes “in their poor English which I know”.

Charamba derisively referred to the G40 – which is reportedly sympathetic to First Lady Grace Mugabe and comprises of Moyo, Zanu PF commissar Saviour Kasukuwere and Youth minister Patrick Zhuwao, among others – as “God’s deputies”.

In statements full of innuendos, Charamba said the unnamed people were “fools, big fools” for thinking they could manipulate their proximity to the First Family to influence the succession issue.

Charamba also hinted there were people who were not too pleased he was working with Mnangagwa.

“The President is the appointing authority. He has given us two VPs. Who is the guilty party? The one who asks a little civil servant why he is working with this or that VP? Or the one who comes forth and says, ‘hey little civil servant, don’t like this VP, like this one’? Is he not substituting the President as the appointing authority?” Charamba queried.

“In the first place, who says Mugabe won’t be there in 2018? And here are these God’s deputies who know when Mugabe will die, who can tell who should not be VPs and who should be, who can tell who must succeed Mugabe when they kill him off and, meanwhile, we must accept that they are not ambitious themselves.”

Charamba once again denied he was Manheru.

However, he seemed infuriated after Moyo last week tweeted that Charamba was in fact Manheru, something the Higher Education minister first disclosed 10 years ago.

But as if directly responding to Charamba’s tongue-lashing, Moyo yesterday took to the micro-blogging platform Twitter, saying: “There’s a silly Shakespearean wordsmith who thinks politics is about clever words and who sees himself as the system when he’s a factionalist.”

Moyo ranted: “George Charamba’s media voices are no longer of a civil servant, but of a politician in aid of a desperate faction. That’s unacceptable. Some of us with hard lessons on the 2004 tragedy of factions resisted the Mujuru faction not for the other faction, but for President Mugabe.

“Zanu PF had two factions. Mujuru’s faction was expelled in 2014 and now exists in the media as PF. Thus, only one faction remains the problem.”

Repeated efforts to get Moyo to clarify his utterances last night were fruitless as his mobile phone rang unanswered, while Charamba was also not reachable.

“It is a battle to demonstrate political power and will remain in the books for a long time whether a permanent secretary who doubles as spokesperson of the President is powerful than a minister.

“It is more personal than political and is a clash of egos. Therefore, it is a fight that will be more in the media than reality. So, it is entirely up to Mugabe to act. Charamba is obviously not issuing such statements without political support.
If he (Mugabe) coincidentally makes a decision or doesn’t, it will show who has the influence.”