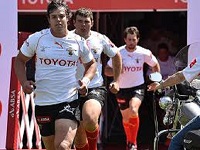 ZIMBABWE – Captain Reniel Hugo scored a brace of tries as the Cheetahs beat the Bulls 28-10 in a pre-season match in Harare on Saturday.

Hugo scored twice in the first half as the Cheetahs opened up a handy 14-3 lead at half-time.

After the break, Bulls coach Nollis Marais made a number of substitutions, which helped inject energy into their game, and there was some reward when Tian Schoeman went over for a try.

However, after a number of scrum infringements, the Cheetahs were then awarded two penalty tries by referee Jaco Peyper, which not only sealed the result, but gave the Bulls coaches an obvious point of concern ahead of the Super Rugby season.

The Bulls will open their 2016 Super Rugby campaign against the Stormers on Saturday, February 27 at Newlands, while the Cheetahs kick off their season against the Jaguares the day before in Bloemfontein.

ZIMBABWE - Captain Reniel Hugo scored a brace of tries as the Cheetahs beat the Bulls 28-10 in a pre-season match in Harare on Saturday. Hugo scored twice in the first half as the Cheetahs opened up a handy 14-3 lead at half-time. After the break, Bulls ...
Share via
x
More Information