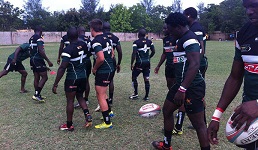 The Cheetahs, as the national Sevens side is affectionately known, go into the continental qualifier battle-hardened having experienced competitive game time domestically, in the Sevens Summer Series, and abroad.

The team also participated in two tournaments in September, in Namibia where they finished as runners-up and in Kenya at the Safari Sevens where they took fourth place.

“Preparations have been going well thus far. We are getting there,” said head coach Daniel Hondo. “Everyone is looking forward to the Olympic qualifiers.”

Zimbabwe are missing newly-appointed captain Hilton Mudariki, who has been ruled out of contention after picking up a hamstring injury at the Safari Sevens.

His predecessor Jacques Leitao will lead the team.

With South Africa already confirmed for Rio 2016, Zimbabwe’s biggest threat is expected to come from Kenya.

“This is really a tough test for us. It will not be an easy task. Everybody is going to come hard at Kenya, but we are well prepared,” said Kenya head coach Benjamin Ayimba.

“The tournament is a sprint as opposed to a marathon where everyone has a shot at the Olympics. We are fired up … the incentive is to qualify for the Olympics.”

Kenya are in Pool A with Madagascar, Mauritius and Senegal. Pool B features Zimbabwe, Zambia, Nigeria and Uganda while Pool C comprises Tunisia, Morocco, Namibia and Botswana.

The winner of the 12-team tournament will qualify for the Olympic Games while the second, third and fourth-placed teams will get one final shot at qualification through the 16-team global repechage tournament in June.

The final four qualifiers were decided by a regional qualifying tournament in the summer with Nigeria and Morocco clinching their place through the north region tournament and Mauritius and Botswana joining them from the southern section.

Meanwhile, the Zimbabwe XVs rugby team, the Sables got their campaign at the Rugby Union Cup of Nations of to a disappointing start after going down 11-30 to hosts Hong Kong yesterday.

The Sables, who were without the serves of four key players due to the Olympic qualifiers, will however be hoping to bounce back strong in their second match against Russia on Tuesday before completing their campaign with a match against Portugal on 21 November.— online