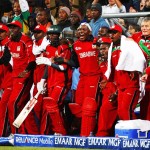 ZIMBABWE – HARARE – A composed 90 from Chamu Chibhabha and a late flourish from Elton Chigumbura took Zimbabwe to a competitive total in the second one-day international against Pakistan at Harare Sports Club on Saturday.

Under pressure after being bowled out for a paltry 128 in the series opener, Zimbabwe’s batsmen gave a better reflection of their abilities in posting 276 for six after being asked to bat first.

Their innings was founded on Chibhabha’s fifth half-century of the year, as the opener steadily went about constructing an innings after encountering some swing early on.

#ZIMvsPAK Pak 32/3 in 11 overs. Double change. @chamulaw into the attack, how will his body hold up after his batting effort? #Zim turnup

His 91-run stand with rookie Brian Chari laid the groundwork as Zimbabwe progressed to 118 for one in the 29th over.

Pakistan’s persistence in keeping a slip in place paid off when Chari edged Mohammad Irfan to depart for a patient 39, and Wahab Riaz found the edge of Sean Williams’ bat.

However Chibhabha added 59 for the fourth wicket with Chigumbura, who ensured that he was ready to launch by the time that Chibhabha had been caught behind off Riaz.

The Zimbabwe captain launched two sixes as he put on 62 runs in six overs with Sikandar Raza Butt, before hitting his wicket to depart for 67 from 55 balls and give Riaz a fourth victim.

With Sikandar Raza and Richmond Mutumbami also finding the middle of the bat, Zimbabwe added a further 23 from the last nine balls of their innings to leave Pakistan with a tall chase.

The tourists won the first ODI of the three-match series by 131 runs.

#ZIMvPAK @LJongwe the ustoppable has impressed with ball in hand yet again. Upwards and onwards!

Zimbabwe not able to read me – Yasir

ZIMBABWE - HARARE - A composed 90 from Chamu Chibhabha and a late flourish from Elton Chigumbura took Zimbabwe to a competitive total in the second one-day international against Pakistan at Harare Sports Club on Saturday. Under pressure after being bowled ...
Share via
x
More Information
x