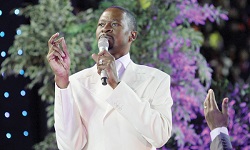 ZIMBABWE – A house built for Muzarabani traditional leader, Chief Kasekete, by United Families International Church leader Emmanuel Makandiwa stands out among the pole-and-dagga huts in the entire village and is already setting tongues wagging amid claims it is haunted.

Perched on a hill facing a small grinding mill, the three-bedroom house was constructed by Makandiwa for the chief in 2012. It was officially handed over amid pomp and fanfare, but claims that it is haunted have overshadowed the gesture.

The house, probably the only well-built house in the entire Chingara Village, has become the talk of the community. Some villagers allege there were some mysterious sounds coming from it at night.

The occupants, however, say they were enjoying peaceful nights. The traditional leader and his family vehemently denied that the house was haunted and that they once deserted it.

But some villagers were adamant, telling NewsDay that Kasekete often abandoned his homestead for a farm he recently “grabbed from a white farmer — Rankin”, leaving his wife alone to face the mysterious sounds.

“We just hear that the chief is not always staying in the house. At times, we understand he leaves it because there are certain things that are happening in the house. We don’t have evidence, but we just hear it from those who are close to him,” one villager, who identified himself as Tawanda, said.

The chief, however, poured cold water on the claims.

“That is what people are saying here, but as you can see, I am staying in my house, very peacefully. It is just that people hate this young man (Makandiwa) and want to create stories that there are problems here. It is a lie,” Chief Kasekete said when NewsDay visited Muzarabani recently.

According to the chief, the house “is a blessing to me, as I sleep well and enjoy dreams”.

“This issue is being propagated by people who hate Makandiwa, particularly churches here who fear losing their members to him. They have been saying this for so long that the Minister for Provincial Affairs, Martin Dinha, came here to investigate and he found that it was a lie,” the traditional leader said.

“Even people from Jomic [an inter-party team created during the inclusive government to spearhead national dialogue] visited me here and investigated the same issue, so it’s something that has been topical here.”

“People are just jealous of what Makandiwa did for the chief. They create stories. We have been staying in that house since it was handed over to us in 2013. At no time have I witnessed anything mysterious, but we hear people saying there are mysterious things happening. I don’t know where they get that information from,” she said.

She, however, flatly refused to allow NewsDay into the house to verify whether they were truly living in the house, saying she needed “express permission” from her husband, who was at Hoya Growth Point conducting his chieftainship business.

“I can’t allow you to enter the house without the permission of the chief, this needs his express permission,” the wife said.

The chief’s wife said the traditional leader occasionally visited his farm in Centenary, but he resided at his homestead.

When the news crew sought permission from the chief to enter the house, he said: “You should have come with the [officials from the] President’s Office or the district administrator, I was going to tell you more and give you all the information you need to know about what is happening.”

Dinha confirmed receiving reports of strange happenings at the chief’s house, but he said the traditional leader had “constantly refuted the information”.

“At first I heard that something was happening there, but when I interacted with the chief, he denied it. He accused his enemies of fabricating issues,” Dinha said.

Makandiwa’s spokesperson, Pastor Prime Kufa, has not responded to messages sent to him three weeks ago.