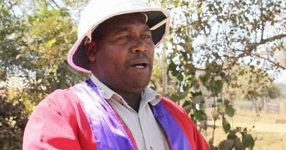 ZIMBABWE – The High Court has sentenced Chief Negomo Mr Luscious Chibvongodze to three months in prison after he failed to repay a loan of $147 000 to CBZ Bank Limited.

Justice November Mtshiya recently slapped the traditional leader with civil imprisonment after he failed to comply with a court order to pay back the loan.

That followed a successful application by CBZ’s lawyer Mr Oscar Gasva of Chirimuuta and Associates.

However, another judge Justice Jester Charewa temporarily stayed the sentence and gave the chief 60 days to settle the debt.

The court gave Chief Negomo an opportunity to finalise his deals with a foreign investor Hermes Capital, a company that is likely to takeover and liquidate the debt.

A High Court order for the traditional leader’s imprisonment dated November 25 this year reads: “It is ordered that the defendant is sentenced to civil imprisonment for 90 days.

“The defendant shall pay costs of the suit at attorney-client scale,” ruled Justice Mtshiya.

Chief Negomo of Watchfield Farm in Mazowe, entered a loan agreement with CBZ in 2012 for $159 211 which he received.

He however, breached the loan agreement after failing to pay back within the agreed timeframes prompting the bank to issue out summons at the High Court.

In his urgent chamber application for stay of execution of the civil imprisonment order, the chief pleaded poverty saying he had no assets of value to satisfy the judgment.

He also indicated that he had since filed an application for rescission of the judgment.

Chief Negomo said he had not been properly served with the summons for civil imprisonment and that he was seeking rescission on that basis.

However, Justice Charewa gave the chief 60 days to sort out his issues.

“Attachment of the applicant (Chief Negomo) is stayed for 60 days. Applicant to complete negotiations for the takeover and liquidation of his debt by Hermes Capital within 60 days.

“Applicant to pay $1 000 per month with effect from 31-12-15 until the successful conclusion of the negotiations with Hermes Capital,” ruled Justice Charewa.

Asked to comment on the different name used in the CBZ debt case, Chief Negomo said that it was one of his family names.

He denied ever being sentenced to prison saying the CBZ dispute had since been settled.

“As you can confirm, you are talking to me and I am not in prison.

“I am actually at my farm and the CBZ issue has since been resolved,” said Chief Negomo in a telephone interview.

ZIMBABWE - The High Court has sentenced Chief Negomo Mr Luscious Chibvongodze to three months in prison after he failed to repay a loan of $147 000 to CBZ Bank Limited. Chief Negomo is popularly known as Luscious Chitsinde, but in the case in question, he ...
Share via
x
More Information