ZIMBABWE – Former Minister of Education, Sport and Culture and ex-Mashonaland East governor Cde Aeneas Chigwedere has appeared before the Harare Civil Court over witchcraft claims by his son, Magwiza Chigwedere.

However, resident magistrate Mr Brighton Pabwe referred the matter to Marondera Civil Court saying the Harare court had no jurisdiction over issues that happen in Marondera where both parties reside.

He dismissed the matter and ordered Magwiza to approach the Marondera court if he wished to pursue the matter.

“This matter was postponed to today for a preliminary judgment,” Mr Pabwe said.

“There were three issues that were raised. However, the court wishes to dispose the matter on the basis that the applicant resides in Marondera so does the respondent. Their permanent town of residence is Marondera and according to law, a court shall have jurisdiction to parties who reside in the same town.

“The applicant and the respondents reside in Marondera where the issues arise. The other reason is that the father is a well-known person in the country. The Harare court has no jurisdiction to entertain the matter which arose in Marondera so the application is dismissed,” he said.

The trial of the matter was supposed to kick off on January 16 and was postponed after Cde Chigwedere’s lawyer, Mr Tendai Masawi from Masawi and Partners, who denied the allegations levelled aganist his client said there were unprocedural mistakes on the matter.

He also said that the matter should be held in Mashonaland East province where the alleged witchcraft issues happened.

Cde Chigwedere was being sued for allegedly practising witchcraft and possessing goblins that have reportedly terrorised the whole clan.

According to papers filed by Magwiza, the erstwhile minister has reportedly caused untold suffering to his children and the extended family.

Also being sued was his wife Emilia Zharare Chigwedere, stepmother to Magwiza. The Zimbabwe National Traditional Healers Association (Zinatha) has also been cited as a third respondent.

Magwiza wanted Zinatha to use its expertise to rid the family of the goblins. 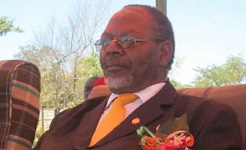 Chigwedere in court for witchcraft