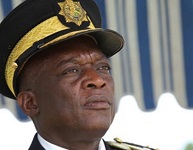 ZIMBABWE – Police Commissioner-General Augustine Chihuri has deplored the use of social media by Zimbabweans to insult each other, saying this had the potential to cause instability in the country.

Though Comm-Gen Chihuri did not mention names, his comments coincide with frenzied tweeting by Higher and Tertiary Education, Science and Technology Development minister Professor Jonathan Moyo who has not only been picking fights but also purporting to announce Government policy on his twitter account.

“All sufferings are as a result of human beings and their agitator. We read a lot of insulting stories in the newspapers everyday. I do not know whether this is contributing to peace. I doubt if it is,” he said.

“Why do people wake up every morning to get a wide vocabulary and research, only to insult the others instead of working for peace and live in harmony?

“Social media is not to be outdone. If they are not in the forefront, I do not know. I am not a social media person. I would not want to disappoint myself by reading the so-called social media which is full of negative things.”

Comm-Gen Chihuri said he would never allow himself to be dragged into a chaotic world of confusion created by social media.

“Some of my police officers are joining social media. They are also getting excitable about it, also writing nonsense on these social media. I urge them to be responsible citizens who contribute to our wellbeing and peace-building.”

Comm-Gen Chihuri said many people in the world were in dire situations because they had no peace.

“The word of God tells us that peace, joy and blessings are divine entitlements ordained by the Almighty God. In this regard, our officers as peacekeepers are undertaking a blessed mandate to complement efforts to bring peace, harmony and goodwill to those who have been unfortunate to be caught up in the tragedy of war,” he said.

“Like I have had occasion to say before, peace is a delicate gift and in this vein it is the vigorous responsibility of everyone to ensure the protection of peace, cultivation of peace and the watering of it,” he said.

Comm-Gen Chihuri urged Zimbabweans to uphold peace at all times.

“As we are all aware, His Excellency, the President of the Republic of Zimbabwe, the Head of State and Government and Commander-In-Chief of the Defence Forces, Cde RG Mugabe has always called upon the nation to uphold peace.

“It is a matter of record that Zimbabwe is an acknowledged oasis of peace. In this respect, I would want to thank Zimbabweans for the peace the country enjoys. I urge that we continue as we are doing to be in one accord in the protection and promotion of the peace we enjoy.”

Comm-Gen Chihuri said the force considered it as a humble honour and privilege to continue to be part of international peacekeeping efforts across the globe.

“As you are all aware, our Service Charter outlines the organisation’s values and underscores the importance of building trust and confidence with our stakeholders through, among others, commitment to the highest quality service and accountability as we carry out our duties with diligence, courtesy and integrity.

“This is why the same standards and expectations that are mirrored at home find resonance on the international platform,” Comm-Gen Chihuri said.

ZIMBABWE - Police Commissioner-General Augustine Chihuri has deplored the use of social media by Zimbabweans to insult each other, saying this had the potential to cause instability in the country. Comm-Gen Chihuri was addressing 31 officers leaving Zimbab...
Share via
x
More Information
x