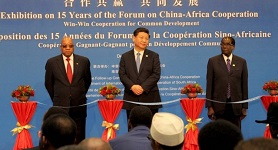 ZIMBABWE – Despite its significant mineral wealth and economic opportunities, Zimbabwe may be more important to China as a symbolic friend.

At the end of last year, China’s President Xi Jinping dropped in to Harare en route to the Forum on China-Africa Cooperation in South Africa where he pledged $60bn for African development. The road to Harare airport was adorned with huge posters welcoming Zimbabwe’s “all-weather friend”. The Chinese delegation included around 200 officials, all keen to consolidate the long-standing relationship between the two countries.

There was much hype in the local press ahead of this visit. Was China going to bail out Zimbabwe, with the government’s Look East policy finally paying off? Was the Chinese president, ahead of the ruling ZANU-PF Congress, going to help with the succession issue by publicly backing Vice-President Emmerson Mnangagwa, who has long ties with China? Was this going to be a turning point for Zimbabwe’s politics and economy?

The answer to all these questions was, in short, no. As with many other engagements with China over the past few years, the heady expectations were not matched by the more pragmatic reality.

China certainly values its partnerships in Africa, and connections with Zimbabwe are important. Chinese interests in mineral exploitation in the country are significant, and as a sympathetic country not captured by Western interests in the southern African region, Zimbabwe can be important to Chinese diplomatic efforts. However, when it comes to China’s myriad international relationships, Zimbabwe is still small fry, and China’s engagement in the country does not amount to a new ‘colonisation’ as some suggest.

In China’s ‘new normal’ – characterised recently by a slowing economy, overvalued currency, and collapsing stock markets – the country is attempting to switch from resource-dependent industrial growth to a more service-oriented, knowledge-based economy. This will take time, but the heat has gone out of its voracious drive to acquire resources in Africa and elsewhere, with trade declining. This has had a major impact on resource-dependent economies in Africa and beyond.

In light of this and despite its considerable mineral resources, Zimbabwe may in fact be more important to China as a symbolic friend, one with which connections date back to the liberation war and back to the early careers of the now-aging generation of ZANU-PF politicians. Of course, the political economy of the relationship is very different to what it was in the 1960s and 1970s, but these connections of solidarity matter on both sides. And both are happy to make use of them, whether through joint deals on land, support for the mining industry, investments in power and infrastructure, security sector support or diplomatic solidarity.

Last month, Zimbabwe hit the international headlines with the (re)announcement that it would adopt the yuan – China’s currency – as part of its multi-currency basket (this has actually been the case since 2014), downgrading in turn the South African rand which has suffered badly recently. This will have virtually no real effect, and the US dollar will continue as the main currency for now, but it was an important symbolic move since China is keen to move the yuan to the status of an internationally tradeable currency. Just as the British PM and Chancellor have offered the City of London as a place for international trading, so too President Mugabe – bizarrely on the same diplomatic and economic mission – offered China the opportunity to symbolically showcase its currency, albeit in one of the most depressed economies in the region.

During the Chinese delegation’s trip to Harare, there were also of course some tangible agreements, signings and offers. There was the long hailed support for the rehabilitation of the Hwange power station; a commitment to help build a new parliament building; the promise of a debt write-off to the tune of $40m; and other promises of investment into the future. In contrast to the hype ahead of the visit, these outcomes from the whistle-stop tour may have disappointed some.

But long after the posters along the airport road come down, the connections between China and Zimbabwe will remain important, both symbolically and economically. Chinese investment in Zimbabwe continues, both through official state-facilitated channels and more informal routes, from small-scale mining operations to deals with farmers made by Chinese companies. The security services, with their strong historic links to China, are an important conduit too, including in retail and agriculture. And Zimbabwe will in turn continue its strong trade in tobacco, and occasionally elephants, with China. Other investors, diplomatic missions and aid agencies will have to take note.

ZIMBABWE - Despite its significant mineral wealth and economic opportunities, Zimbabwe may be more important to China as a symbolic friend. At the end of last year, China’s President Xi Jinping dropped in to Harare en route to the Forum on China-Africa...
Share via
x
More Information