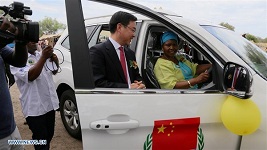 The two national parks, home to some of Africa’s largest elephant herds, have become increasingly vulnerable to poaching as a result in the shortage of wildlife protection funding.

Huang said China, as an “all-weather” friend, is committed to assisting Zimbabwe in fighting wildlife poaching.

Zimbabwean Minister of Environment, Water, and Climate Oppah Muchinguri thanked China for the timely assistance, saying the donation will “go a long way” in bridging the existing gap between the resources and the huge demands for conservation.

Muchinguri decried poor funding of the national parks agency which she noted was undermining its capacity to effectively fight poaching and engage in sustainable wildlife conservation and protection.

The reputation of Hwange National Park, which holds close to 50,000 elephants, was tarnished this year as over 60 elephants were killed for tusks by poachers who laced toxic cyanide in the watering pans.

The authorities were unable to prevent the tragedy as they did not have the manpower and facilities, including vehicles and surveillance devices, to patrol the sprawling park, measuring 16,000 square kilometers.

“These challenges have been exacerbated by government’s limitation to adequately monitor and enforce wildlife regulations.”

He said China has played its part in conservation, and its assistance extended to Zimbabwe is an excellent example of such contributions.

During a visit to a wildlife sanctuary in Zimbabwe’s capital Harare last week, President Xi said his country was committed to wildlife protection and will provide Zimbabwe with more assistance for preserving the vital component of the natural ecosystem.

He pointed out that wildlife protection was one of the key areas in China-Zimbabwe cooperation and that China will continue to help Zimbabwe improve its wildlife capability in this regard by donating equipment and conducting exchanges of experience.

Over recent years, China has intensified efforts in wildlife protection, including a harsh clampdown against illegal wildlife trafficking. In October, Chinese authorities announced a one-year ban on imports of African ivory acquired as hunting trophies.

The ban followed a similar measure enacted in February against imports of African ivory carvings acquired after the Convention on International Trade in Endangered Species of Wild Fauna and Flora (CITES) took effect in 1975. In May, China publicly destroyed 662 kg of confiscated ivory.

During Xi’s landmark state visit to the United States in September, the two countries committed themselves to nearly complete bans on ivory import and export, including significant restrictions on ivory huntingtrophies, and regulations aimed at halting domestic commercial trade of ivory.