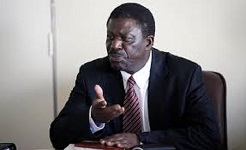 ZIMBABWE – China has become the largest foreign investor in Zimbabwe after the emerging Asian giant poured more than $200 million into the country in 2014, latest figures show.

This comes as the southern African country attracted a total of $545 million last year in foreign direct investments — a 36 percent surge from $400 million registered in 2013 — according to United Nations Conference on Trade and Development report on Zimbabwe.

“China is now our biggest source of foreign direct investment (FDI) with a total sum of $238 874 520 having been invested in 2014 in agriculture, construction, manufacturing, services, transport and tourism sectors” Bimha said.

“As we speak right now, it is no secret that the majority of investment delegations that came into Zimbabwe were from China. We project that last year’s figure may very likely be overtaken by the amount of investment the Chinese are bringing in this year,” he added.

Speaking at the same event, Investment Promotion minister Obert Mpofu said the move by both countries to broker private sector deals was a sign that trade figures between the two countries were going to surge.

“Most of Zimbabwe’s FDI comes from China after the Look East Policy, however, after recommendations from our One Stop Investment Centre Committee we are looking at ensuring that the investment terrain is smooth for all investors,” he said.

This comes as United Nations Economic Commission for Africa Executive Secretary Carlos Lopez said African leaders had to confront the reality that Chinese investment in Africa was not enough for the “mineral sacrifices” it was warranting.

The hard-pressed southern African nation last year brokered infrastructure and platinum deals with China and Russia respectively,
but government has come under fire from various quarters as the deals are yet to materialise.

China’s investments abroad are massive, amounting to $870 billion at the end of last year, according to data released by the Heritage Foundation, an American research institute. The United States leads the way, having received a little more than $72 billion. Of the total, China pledged investments of $20 billion to Africa with countries like Chad and Niger now owing to China about 15 times what they receive from the International Monetary Fund.

However, Mpofu told delegates that Zimbabwe was in the process of tapping into China’s massive FDI policy through investment law reform.

“China certainly can do more, but at the moment as a ministry we are working towards ensuring that investment processes in the country are smooth so that more investment comes,” he said.’China now Zim’s largest investor’

ZIMBABWE - China has become the largest foreign investor in Zimbabwe after the emerging Asian giant poured more than $200 million into the country in 2014, latest figures show. This comes as the southern African country attracted a total of $545 million...
Share via
x
More Information
x