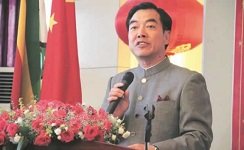 ZIMBABWE – China respects the Government’s decision to cease operations of companies that were mining diamonds in Chiadzwa and has no problem with actions being executed within the confines of the law, Chinese Ambassador to Zimbabwe Mr Huang Ping has said.

Ambassador Huang said small differences would not affect the bond between China and Zimbabwe.

If differences were to exist, the envoy said, they would be resolved in a progressive manner that does not affect agreed projects.

This comes after Government ordered firms mining in Chiadzwa to cease operations and vacate the area within three months.

The firms, which include Mbada Diamonds, Diamond Mining Company, Jinan and Anjin, had not renewed their licences as stipulated by the Mines and Minerals Act.

This saw Government resolving to take over the diamond fields to be run under the Zimbabwe Consolidated Diamond Company, a move which the companies resisted.

Some of the joint ventures in Chiadzwa, principally Anjin, involved the Chinese.

The merger sought to boost accountability and transparency.

Hours after Government announced the measure, the private media intensified its propaganda agenda, claiming that mega deals sealed between Zimbabwe and China were now in doubt.

“That does not affect this relationship,” he said.

“We respect the move the Government of Zimbabwe has taken. I think we can find a way to deal with problems because even brothers and sisters have different ideas, sometimes in one family. Our cooperation will continue and we always find a way through consultations if problems do exist.”

He said Chinese companies should respect Zimbabwean laws with the later also respecting the interests and agreements it sealed with companies from the Asian country.

“Abide by the law and everything will be protected and we also signed an agreement with Zimbabwe around 1996 and this should be observed also,” Mr Huang said.

“President Xi (Jinping) said he will join hands with President Mugabe to continue strengthening this relationship and there is good cooperation between our two countries. He was greatly impressed by the hospitality during his State Visit here and FOCAC.”

He said it was “mischievous” for someone to conclude that the investment decision of one or two companies would affect the mega deals.

The Minister said the move by Government had not been done in the spirit of fighting or hostility and hence would not affect relations between China and Zimbabwe.

The agreements between the two countries were agreed at the highest level with Presidents Mugabe and Xi Jinping reciprocating visits in 2014 and 2015 respectively.

ZIMBABWE - China respects the Government’s decision to cease operations of companies that were mining diamonds in Chiadzwa and has no problem with actions being executed within the confines of the law, Chinese Ambassador to Zimbabwe Mr Huang Ping has sai...
Share via
x
More Information