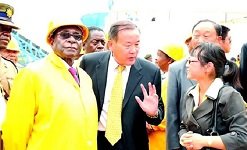 ZIMBABWE – A brooding China yesterday warned Zimbabwe to beware after President Robert Mugabe’s government ill-advisedly moved to seize all diamond mining claims in Chiadzwa last week, including those in which Chinese companies have interests.

China, which has been one of the few world powers that have kept their relations with Harare warm over the past 16 years of political and economic turmoil in Zimbabwe, told the Daily News yesterday that Zimbabwe ought to respect property rights in the country.

“We hope that the Zimbabwean side would earnestly safeguard the legitimate rights of the Chinese companies and employees, according to the local laws and the ‘Agreement on the encouragement and reciprocal protection of investments between China and Zimbabwe,” Chinese ambassador to Zimbabwe Huang Ping said in a terse email response to questions.

“The Chinese side is willing to enhance communication and negotiation with the Zimbabwean side, and together create a conducive environment for companies from both sides to conduct mutually-beneficial cooperation,” Ping added.

Analysts canvassed by the Daily News said although the statement was couched in diplomatic language, its message was “clear and hard-hitting” — and amounted to Zimbabwe being “put on notice” by the Asian giant.

“As a contingency plan pending the hearing of this matter on Wednesday, 2 March 2016, as aforesaid or such other day as might be heard, all the fifth respondent’s (Mbada’s) security personnel, with all their chain of command, shall forthwith return to the fifth respondent’s mining site in the Chiadzwa diamond concession.

“And the first, second and fourth respondents (Chidakwa, the Zimbabwe Mining Development Corporation (ZMDC) and the Zimbabwe Consolidated Diamond Company (ZCDC) respectively) shall allow such security personnel full access to the mining site; full access to all the relevant premises thereat, including residential premises; full access to all the equipment, diamond ore, and any other assets belonging to the fifth respondent for the purpose of safeguarding such assets in every manner possible, and the first, second and third (Marange Resources) respondents shall desist from interfering with such personnel,” Mafusire ordered.

Although Chidakwa last week claimed that no diamond mining company had given government any money, Grandwell issued a statement saying Mbada Diamonds had actually released to government about $480 million in the six years they were in operation.

This all came after Chidakwa ordered all diamond mining companies to end their operations, leave their equipment behind and vacate their premises last week, as the government moved to expropriate the operations.

Chidakwa said the government had reached the decision after miners, including Chinese firms Anjin Investments and Jinan, did not agree to the nationalisation of their assets.

Soon after the seizure of the companies, reminiscent of the disastrous land grabs of 15 years ago, hundreds of dealers and illegal panners (makorokoza) invaded the Chiadzwa diamond fields.

Zimbabwe’s decision also set it on a collision course with its key allies China and Russia, who have on numerous occasions indicated their willingness to bail out Harare with much-needed foreign direct investment.

Chinese President Xi Jinping recently visited Zimbabwe and presided over the signing of various agreements to upgrade and rebuild the country’s infrastructure.

At least 10 economic agreements were signed during Jinping’s visit, of which a $1 billion loan to expand Zimbabwe’s largest thermal power plant was the most significant one.

Economic experts said last week that these vaunted multi-billion dollar deals with China were in jeopardy following Harare’s seizure of all diamond mining claims in Chiadzwa.

At the same time, well-placed Zanu PF sources told the Daily News that Chidakwa’s decision was closely linked to the ruling party’s worsening and seemingly unstoppable factional, and succession wars.

“Our Beijing friends, who have walked with us even during our worst times, are understandably very upset with this irrational move.

“They are also saying that this will have dire consequences for the mega-deals that we signed with them last year,” one of the sources said.

Analysts who spoke to the Daily News also agreed that Zimbabwe risked “losing a lot” from the Chinese, following the State’s violation of an 18-year-old bilateral investment promotion and protection agreement (BIPPA) with the Asian giant.

“The Chinese investors will not just sit and watch their investments going under the drain. They are likely to pressure their government to withdraw its support to Zimbabwe,” analyst Francis Mukora said.

Meanwhile, the under-fire Chidakwa and his Home Affairs counterpart, Ignatius Chombo, rushed to Chiadzwa last week, in a desperate bid to douse the flames around Harare’s ill-timed move, and the chaos that followed its move.

Chidakwa came back from Chiadzwa claiming that four panners had been arrested but police later said that 50 illegal miners had infact been arrested leaving observers wondering why the minister was underpaying the numbers.

At the same time, a number of foreign companies operating in Chiadzwa have said that they are considering instituting legal proceedings to enforce their rights in a development, which analysts say has further dented Zimbabwe’s battered international image.

The Russian Embassy — representing one of its companies, which operates a diamond venture in Chimanimani — said it had “no comment at the moment”, although it is believed that they were also taken aback by the government’s move.

ZIMBABWE - A brooding China yesterday warned Zimbabwe to beware after President Robert Mugabe’s government ill-advisedly moved to seize all diamond mining claims in Chiadzwa last week, including those in which Chinese companies have interests. At the sa...
Share via
x
More Information