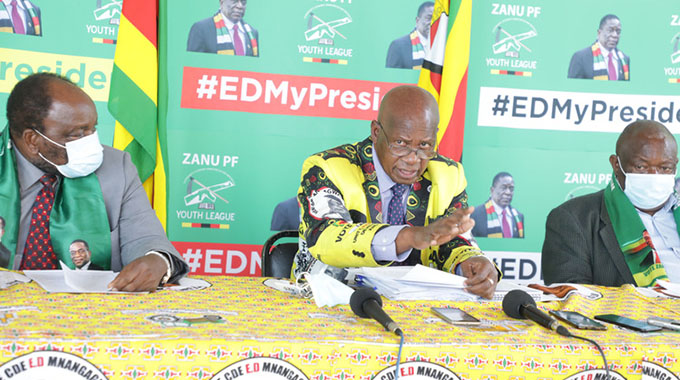 From arrogance, insatiable appetite for violence and the careless statements, Chinamasa represents everything bad in Zanu PF. He simply reminded Zimbabweans that the ruling party is out for the blood of anyone who thinks differently.

Blocking opposition MDC Alliance leader Nelson Chamisa from meeting villagers in Masvingo with the aid of riot police stinks. Chinamasa and his ilk are behaving like street thugs.

Infact, what Chinamasa and Zanu PF are simply saying is that the use of violence in political contestation is acceptable and the abuse of police should be standard.

What we hear Chinamasa and Zanu PF saying is that the opposition will be barred from campaigning across the country, especially in rural areas ahead of the 2023 elections.

It is apparent also that Zanu PF will have the aid of the police to block opposition meetings and that the State media will neither see nor hear any evil.

Why bar Chamisa from his interactive meetings as if he is inconsequential and an outcast? If he has no plan? If he is useless? If he is not a threat to the status quo? Did we not see MDC-T leader Douglas Mwonzora and NCA’s Lovemore Madhuku traversing Masvingo on political campaigns freely the previous week and the silence from the usual quarters was defeaning.

Chamisa is a Zimbabwean politician who got nearly 2,2 million votes in the 2018 elections — according to official count, (President Emmerson) Mnangagwa only managed 300 000 more — and, therefore, Chamisa deserves the freedom guaranteed in the Constitution, including protection from State-sponsored hooligans and security agents.

For someone like Chinamasa, who lost in his constituency in the 2018 elections to come up with imprudent justifications for a wrong is a new but an unsurprising low for Zanu PF in general and its leadership in particular.

Zanu PF’s “moments of madness” are far from over, starting from the Gukurahundi atrocities, the 2000 violent farm invasions, the 2008 election runoff murder spree, the post-2018 elections killings, the 2019 fuel riot murders and now a preview of the likely mayhem the party is plotting for 2023 election.

How the police, Zanu PF and its hired goons are treating Chamisa is exactly how Zambian former President Edgar Lungu, State security and the Patriotic Front did to then opposition leader Hakainde Hichilema before the election in that country and the results were there for all to see.

Zanu PF cannot go to town about being a new dispensation when it has people like Chinamasa, who have lost all sense of shame. Clearly, these are individuals working hard against Mnangagwa, derail his programmes and then push him out sooner rather than later, yet they claim otherwise.

Chinamasa needs to tone down rhetoric