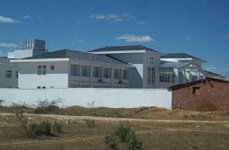 ZIMBABWE – The area of Mahusekwa had been a nondescript rural outpost in Zimbabwe that few people could find it on the map. Fewer could justify a visit.

But things have changed. Over the past two years, people living in the Marondera district – with a population of 190,000 – came quite often to this tiny township. And the main draw is no other than a modern hospital.

The Mahusekwa Hospital, also known as China-Zimbabwe Friendship Hospital, was built under a Chinese aid project to help Zimbabwe provide quality health services in the countryside, where 70 percent of the population live.

The construction and supply of medical equipment of Mahusekwa hospital took about two years to complete, and the $ 6 million project was commissioned in early 2013, according to Ling Jinxiang, project manager of China’s Nantong Construction Group Co., Ltd.

“When we first came here, the place was all bushes,” said Ling. “In a small town like this, the access to proper health care was not easy. No wonder our project is much welcomed here.”

The three-column, two-story hospital, with its imposing look, has been an indisputable landmark of the area.

Tawanda Borerwe, the medical officer of Marondera district whose administration oversees Mahusekwa, said the local community is now getting health services at their doorstep, unlike in the past when they had to travel to Marondera Provincial Hospital which is 46 km away.

“We used to struggle looking for bus fare to get to the nearest hospital but we no longer have this problem as we now just walk to the hospital,” said 38-year-old Tsitsi Machanyangwa who was seeking treatment for leg pain.

Sheila Chakaingesu, a 22-year-old mother who brought her child for immunisation, said they used to travel 30 km to get to the nearest clinic. The hospital, with all its modern facilities, was such a relief to local residents.

But being close is not the only advantage of the hospital. It has the best facilities among the district-level hospitals. Offered services include x-ray, ultrasound scan, dental services, CT scan, endoscopy and specialized orthopedic services.

“This hospital came at the right time when we really wanted to offer health services such as the ones we are offering,” Borerwe said. “For example, orthopedics is a specialized service which can only be obtained at central hospitals.”

Zimbabwe has five central hospitals located in Harare and Bulawayo. Most of the provincial, district, and primary health institutions face chronicle shortages of funds, facilities, and qualified staff.

With a staff complement of 175 including three medical doctors, the Mahusekwa hospital is supposed to serve only Marondera district, but due to the extensive and specialist health care it offers, the hospital attracted people from as far as 200 km away. Some even came from Harare.

The poor and vulnerable members are receiving affordable treatment, said hospital administration officer Charles Goredema. “We even offer free treatment to those who cannot afford to pay.”

“It has gone a long way in lowering maternal deaths in the district because we are offering free maternity services nearer to the people,” he said.

The hospital was part of the 30 hospitals China pledged to build, along with 30 malaria control centers across Africa at the first summit of the Forum on China-Africa Cooperation (FOCAC) in 2006. It was followed by a pledge to further donate $ 79 million worth medical facilities and medicines to these aid projects.

China has a tradition of sending medical doctors to African countries on two-year stints. But the modality of health aid has changed over the years. Last year, China Export and Import Bank gave Zimbabwe a $ 100 million loan to purchase medical equipment to more than 90 hospitals and clinics across the country.

ZIMBABWE - The area of Mahusekwa had been a nondescript rural outpost in Zimbabwe that few people could find it on the map. Fewer could justify a visit. But things have changed. Over the past two years, people living in the Marondera district - with a popu...
Share via
x
More Information