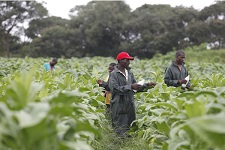 ZIMBABWE – A Chinhoyi-based Chinese businessperson has lashed out at Zimbabwe’s “restrictive labour laws and prohibitive investment policies,” describing them as a major bottleneck to the country’s bid to attract foreign investment.

Yang Zhimeng, manager of ZIM-China Wanjin Agricultural Development Company, told NewsDay in an exclusive interview at the weekend, that although Zimbabwe was endowed with natural resources and good weather, its harsh “labour laws” chased away potential investors.

“Zimbabwe is quite a fascinating place to do farming business. There are so many good resources, for example, the land, climate and the farm workers,” Yang, who operates a brick-moulding business just outside Chinhoyi,” he said.

“It’s pretty good, this is absolutely your advantage, but on the other hand I think there is need to improve policies on foreign investment. The government should facilitate the application of business licences and the flow of goods and capital without stringent conditions.”

“I would like to mention the Labour Act of this country, I think it is too strict. They set the minimum salary, so all the workers must be paid more than that standard, but if the worker doesn’t perform we cannot reduce the salary,” Yang said.

Asked about cheap Chinese imports that have flooded the Zimbabwean market, leading many to loathe the products, he laid the blame on Zimbabwean business people, whom he said import “too many cheap products and damage the image of Chinese products”.

Yang said China produces products for all classes adding generally there is a balance between the price and quality of the goods.

Some workers at the brick-moulding plant who spoke on condition of anonymity, said although their wages were below the stipulated rates, they were happy that at least they were paid on time.

ZIM-China Wanjin Agricultural Development Company employs more than 50 workers at its brickmaking project and farm. They hire contract workers on a daily basis to load the bricks for $3 per load and long contract workers who earn $152 per month.

ZIMBABWE - A Chinhoyi-based Chinese businessperson has lashed out at Zimbabwe’s “restrictive labour laws and prohibitive investment policies,” describing them as a major bottleneck to the country’s bid to attract foreign investment.  Yang Zhimeng,...
Share via
x
More Information
x