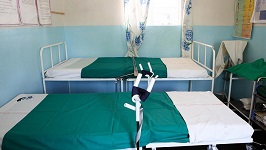 HARARE – A Harare Hospital has detained Blessing Mhondiwa, a victim of a hippo attack, over an outstanding bill, local journalist, Hopewell Chin’ono has said.

He has been discharged from Harare Hospital, but he needs restorative surgery to restore his jaws and teeth.

“I am told that Harare Hospital won’t release him unless he pays Z$173,000. Where did a similar story happen and ZANU PF shed crocodile tears?Blessing Mhondiwa needs to quickly move to Parirenyatwa Hospital for the next surgery. Why would you detain a child who needs urgent care at another Government hospital?Yet they screamed about the South African MEC who detained a Zimbabwean patient, what rank hypocrisy!”

This comes barely days after a South African medical doctor, Phophi Ramathuba, who is also the Member of the Executive (MEC) of Health for the Limpopo Province refused to discharge a Zimbabwean patient over outstanding bills.

She also told her that Zimbabweans seeking medication in South Africa were overburdening the neighbouring country and therefore should be treated in Zimbabwe triggering criticism from some quarters.

Zimbabwe’s health sector has been collapsed for years amid allegations that political elites have been looting resources meant for the sector.

Most senior government officials seek medication from neighbouring countries with some going as far as China, India and Singapore.

HARARE - A Harare Hospital has detained Blessing Mhondiwa, a victim of a hippo attack, over an outstanding bill, local journalist, Hopewell Chin’ono has said. Chin’ono says the boy owes ZWL$173 000, approximately US$332 at the prevailing formal market ...
Share via
x
More Information