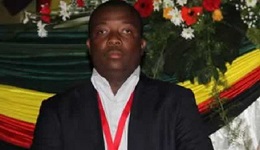 ZIMBABWE – The High Court has interdicted Zanu-PF deputy youth secretary Cde Kudzayi Chipanga from threatening war veterans with violence before ordering him to pay costs of the suit on a higher scale.

Cde Chipanga allegedly threatened former freedom fighters with violence during an address to a group of youths, a day before a failed war veterans meeting in Harare last week.

On Tuesday, Cde Chipanga declared war on veterans of the liberation struggle whom he described as “sickening rabble-rousers”. He said they stood no chance against the youths.

He said the youths “outnumbered” the liberation war fighters and were not afraid to fight them.

He also threatened to mobilise the youths to demonstrate against The Herald for alleged “biased reporting”.

Justice Jester Charewa yesterday ruled against Cde Chipanga in a case in which the Zimbabwe National Liberation War Veterans’ Association (ZNLWVA) was challenging the conduct of the youth leader in threatening and denigrating freedom fighters last week.

Lawyers for ZNLWVA, Nyika Kanengoni and Partners, on Friday faced resistance from identified people at the Zanu-PF Headquarters in a bid to serve the urgent chamber application on Cde Chipanga.

On Saturday, the lawyers engaged the services of the Sheriff of the High Court, Mr Mcduff Madhega, who also had difficulty serving Cde Chipanga with a notice of the case’s set down.

Justice Charewa had no option but to grant the freedom fighter’s request in the absence of Cde Chipanga.

“The third respondent (Cde Chipanga) be and is hereby ordered not to threaten any member of the applicant with violence.

“The third respondent be and is hereby ordered to pay costs on an attorney and client scale,” ruled Justice Charewa.

The ZNLWVA had cited Home Affairs Minister Ignatius Chombo and Police Commissioner-General Augustine Chihuri as first and second respondents respectively in the matter, but made a U-turn later and withdrew their case against the two, leaving Cde Chipanga.

The withdrawal of the case against Minister Chombo and the police followed President Mugabe’s public apology to the war veterans and a unifying message in his State of the Nation Address on Friday that has been well received by the nation.

ZNLWVA on Saturday issued a statement to the Press and part of it reads:
“The President’s words have indeed complemented the medication that the wounded comrades are receiving.

“The intervention by His Excellency has confirmed the historic bonds of comradeship which exist between His Excellency and the war veterans of Zimbabwe’s liberation.

“We are now confident of procuring His Excellency’s assurance and facilitation for the holding of the association’s meeting without hindrance.

“Accordingly, the matter which we had filed against the Minister of Home Affairs and the Commissioner-General of Police will be withdrawn but that against Kudzai Chipanga will proceed.”

Unravelling the rebel in me