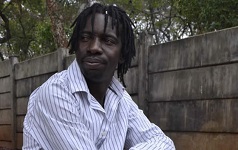 ZIMBABWE – For more than 15 years, he has skilfully strummed his lead guitar and done music at various levels locally, but lucrative opportunities have been evasive for the talented singer due to various reasons.

So, the December 4 flight to UK easily became the most exciting part of Chipfumo’s eventful career as he was poised to end 2015 in style with his debut overseas tour.

He was not only happy with the prospect of music networks in a country he had heard a lot about, but was also elated  to board a plane for the first time and optimistic about reuniting with his former colleagues in Hohodza Band that are now based in the Queen’s land.

He did not expect his exciting dream to blow into a nightmare that it turned to be when the Zimbabwean musicians were dumped by the organisers of the tour when their shows ended.

The organisers, Afrodayz Productionz, are said to have disappeared at the end of the tour without paying the artistes that had fulfilled all their gigs.

Speaking from the UK where he was still holed up yesterday morning, Chipfumo said they had endured a tough time that made them hate their profession for some days.

He said the promoters are nowhere to be found and the artistes are coming back home with nothing but memories of a wasted festive season that could have seen them pocketing something for subsistence if they had been part of the many gigs that took place in December back home.

“The shows went well and we were expecting to get paid after the tour. We had trusted the promoter after a few consultations and we agreed to come here without getting deposits for our performance fees. We were alarmed when the promoters became evasive as the tour came to an end and all hell broke loose,” said Chipfumo.

“Ras Caleb was supposed to leave on January 7 and he was told his payment was not immediately available. Fearing the complications of overstaying, Ras Caleb had decided to leave but there was a problem with his return ticket and he could not go.”

Chipfumo said the Ras Caleb issue was the beginning of the fiasco as it made them realise the promoters were not sincere.

“We became suspicious and confronted the promoters. Everything went off  rail. They disappeared and their mobile phone numbers became unreachable”.

“We went to one of the organisers’ house in Sheffield and we did not find him. That is when we realised we had been duped”.

“Don Gaga told his friends here about the issue and we discovered that Afrodayz Productionz had actually been given a grant from Sheffield Council to host the tour on the lines of cultural exchange, which means they had the money but were just being dishonest.”

Chipfumo said he was supposed to be paid £600 per show for the four gigs that he did under the promotions company. He did not get anything and there is no one to explain the issue.

The musician said they managed to get assistance from their friends and relatives when things got bad and Ras Caleb and Lipsy left the UK without getting paid on Wednesday and were expected home yesterday afternoon.

Diana left the UK on Tuesday and should have arrived in Harare on Wednesday, but her mobile phone was unreachable yesterday.

However, the diva’s Facebook posts when she indicated she was leaving the UK did not suggest she had a tough time. Chipfumo did not know much about Diana’s situation.

Chipfumo was initially supposed to return on Wednesday but his departure had been rescheduled to yesterday afternoon. He said he would travel with Don Gaga and they are expected in the country this afternoon.

It was not clear what happened to other musicians, Drum Dada and Hollipah D, that were part of the tour. Chipfumo said all musicians had gone separate ways when the fiasco ensued, as they got refuge from friends and relatives.

Efforts to get a comment from Afrodayz Productionz were fruitless.

However, Chipfumo said despite the nightmarish end to the tour, he was happy to meet his former Hohodza Band workmates and he had managed to make new contacts and get a few shows outside the Afrodayz Productionz schedule.

“The tour had its happy moments. I am used to dishonest promoters even back home and I will value the time I had with my old friends. I had last seen some guys I worked with at Hohodza Band about 15 years ago and it was an exciting reunion.

“I also saw several Zimbabwean musicians that have settled here. I got hired and paid to play at a few shows through these friends.

Afrodayz guys were aware of these few extra shows I did. They approved the shows and I did not breach any contract. Those guys exploited us and this is just one lesson I have learnt and I will be more careful in future. After all, it was my first overseas tour.”

ZIMBABWE - For more than 15 years, he has skilfully strummed his lead guitar and done music at various levels locally, but lucrative opportunities have been evasive for the talented singer due to various reasons. So, the December 4 flight to UK easily beca...
Share via
x
More Information