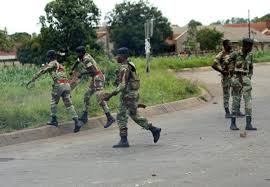 VICTORIA Falls – Chisuma community leaders in Victoria Falls are outraged at the claims by Zimbabwe Republic Police (ZRP) that the two villagers that were shot dead by soldiers last Wednesday were trying to disarm them.

They have since demanded that soldiers be removed from the area.

Assistant Commissioner Nyathi said “ the Zimbabwe Republic Police is investigating the circumstances in which two suspects tried to disarm members of the Security Services who were on an anti-smuggling deployments in Victoria Falls on 30th September 2020 resulting in a shooting incident and the death of the two suspects.”

Many traditional and political leaders have however been angered by these claims.

The two soldiers identified as Bonang Nare and Bernard stationed at 1.2 Infantry Battalion in Hwange are facing murder charges after they were arrested.

It is alleged that the soldiers were drinking beer at Langton Bar when the altercation ensued before they went back to their base Chisuma Primary School and came armed with guns then shot the victims.

Some villagers retaliated and burnt down a house belonging to one Munyaradzi Mlauzi, the bar owner who it is claimed to be working with the soldiers.

On Sunday there was a meeting between the amry officials and villagers with the tension growing as the villagers demanded that soldiers be withdrawn from the area.

“The statement that was given by the police implying that those civilians were shot after resisting being dispersed is not true,” said Godfrey Dube, Hwange West legislator.

Adding that“What they are doing is just a cover up to justify this callous murder, and we are disappointed as the leaders of the community, and their defence has fuelled anger and unrest among the villagers.”

The Hwange legislators also said they have received several reports of security forces brutalising villagers in the area. He also said police should have gone to the scene to get credible statements from eye witnesses.

The legislator added that the police should have been deployed to the scene and recorded credible statements from eye witnesses.

“I have had to bring together local councillors and the chief (Mvuthu) to discuss how the events have turned out and how people may be pacified. People are angry and the families are hurting.”

“My heart is in pain because these were my children and the fact that they died without being ill hurts even more,” he said.

“I visited the two families and what l observed there was a sorry situation. Their families including children have been left without a father figure and that too is painful. It is not true that these people were killed after trying to disarm the soldiers. I have spoken with several eye witnesses and villagers and it is evident that these soldiers came carrying guns just to victimize and kill these two men. No one fought the soldiers.”

Mpofu and Sibanda are yet to be buried.

VICTORIA Falls - Chisuma community leaders in Victoria Falls are outraged at the claims by Zimbabwe Republic Police (ZRP) that the two villagers that were shot dead by soldiers last Wednesday were trying to disarm them. They have since demanded that soldie...
Share via
x
More Information
x