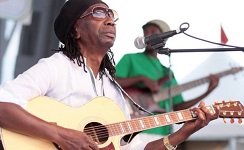 ZIMBABWE – Chimurenga music guru Thomas Tafirenyika Mapfumo is returning to South Africa within a space of three months for what he calls a Christmas Party for his fans.

Blessing Vava, Mukanya’s publicist, told NewZimbabwe.com that Mapfumo, who has been invited to perform at this year’s edition of the Mapungubwe festival in Limpopo slated for December 12, will hold separate shows for his fans after his core assignment.

After the festival, Mukanya will be making an emotional return to Johannesburg’s Bassline situated in Newtown, were the legendary artist held a memorable show in September.

He will hold another show at Actic Marimba in Cape Town on the 20th of December.

Vava said Chimurenga Music fans should come in their numbers to for the two Christmas parties which Mukanya has lined up for them.

As Chimurenga Music Company, we encourage all music lovers to come in droves and see the Lion of Zimbabwe dish out hits from his rich discography as he will also be sampling songs from his forthcoming album Chinogiya to be released early next year, said Vava.

During his African Tour in September he also staged some performances in Mozambique’s Chimoio which were attended by hundreds of Chimurenga music fans mostly from the eastern side of Zimbabwe.

In 2012, the US-based musician was tipped to return after the then Prime Minister Arthur Mutambara had identified his return as a plus for the rebranding of Zimbabwe.

Mutambara’s efforts were however fruitless after Police Commissioner General Augustine Chihuri insisted that Mapfumo would be arrested on charges of buying stolen cars should he ever set his foot on Zimbabwean soil.

ZIMBABWE – Chimurenga music guru Thomas Tafirenyika Mapfumo is returning to South Africa within a space of three months for what he calls a Christmas Party for his fans. Blessing Vava, Mukanya’s publicist, told NewZimbabwe.com that Mapfumo, who has bee...
Share via
x
More Information