ZIMBABWE – A section of britain’s economy has been ranked worse than poverty-stricken Haiti and inflation-hit Zimbabwe.

The World Economic Forum has blasted the deficit, savings and debt in a new report looking at Britain’s place on the global stage.

Overall the country has slipped from 9th to 10th in the world rankings, with Switzerland topping the chart followed by Singapore, the US and Germany.

But the report is more scathing when it comes to Britain’s ‘macroeconomic environment’ under the Tories, a general look at its financial status including savings, credit rating and debt.

Despite George Osborne’s pledge to wipe out the deficit by 2019 – now delayed to 2020 – Britain suffered in the rankings because it still spends far more than it earns.

The deficit is still more than double what it was at any time under Labour before the 2008 global crash despite Mr Osborne insisting the economy is recovering.

Overall Britain was ranked 108th out of 140 countries for its macroeconomic environment in the Global Competitiveness Index.

At 104th, Zimbabwe suffered years of hyperinflation under 91-year-old President Robert Mugabe – and had to phase out its currency after printing trillion-dollar notes with an exchange rate of 35 quadrillion to one US dollar.

Countries ranked even worse than Britain included Spain, Greece, Mozambique and Sri Lanka, with Malawi at the bottom of the list.

Many developed countries have higher debt because they are allowed to borrow more thanks to their credit rating.

The US also ranked poorly at number 96 while overall winner Switzerland dropped to number six.

Britain did better when it came to health and primary education where it was ranked 18th, still below first-placed Finland, Ireland, Slovenia and Cyprus.

Its financial institutions were ranked 14th, infrastructure was 9th and universities ranked 18th. 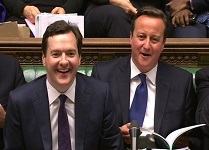 ZIMBABWE - A section of britain's economy has been ranked worse than poverty-stricken Haiti and inflation-hit Zimbabwe. The World Economic Forum has blasted the deficit, savings and debt in a new report looking at Britain's place on the global stage. Ov...
Share via
x
More Information
x