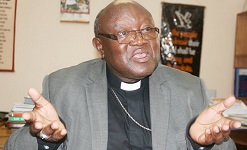 ZIMBABWE – The-economic reality of any society on earth is expressly or impliedly determined by the movement, interpretation and application of information between and among individuals and institutions across the divide.

As such, various authoritative mechanisms of information dissemination, such as religion, cannot be easily vindicated when taking a closer look at Zimbabwe’s deplorable economic reality.

Now, considering the fact that Zimbabwe is predominantly a Christian society, it means church leaders wield considerable influence in shaping the imagination, decisions and actions of the people of Zimbabwe, leaders and general citizens included.

While the church can be commended for helping to maintain peace and giving hope to the masses, amidst various challenges faced by individuals and institutions across the country’s provinces, it is also equally concerning to note that a number of influential business and political leaders in Zimbabwe claim a Christian religious affiliation of some sort and yet perform dismally.

It is also greatly disturbing to note the deafening silence of church leaders when it comes to the public condemnation of ills such as corruption, lack of corporate governance and abuse of funds in the administration of both private and public institutions and yet some of the influential perpetrators of these ills are outspoken congregants.

There is need for the people to question the quality of church leaders that have oversight on them and the type of relationships that such people have with politicians because the Bible gives people the right to question and test the spirits.

If people do not question their church leaders, they may end up allowing their souls to be subject to fake prophets, who can actually manipulate even the few good politicians that can be found in this nation, as was the case with a fake prophet, Bar-jesus, in the book of Acts.

In Zimbabwe, it is paining to note that there is a notable emergence and increase in the number of churches and yet corruption and economic failure is seemingly establishing itself at relatively the same rate.

The question that, therefore, quickly comes to mind is what are these church leaders telling their congregants who make up the majority of the population in the country and yet the economic reality of the country remains dismal and continues to move downwards?

It is also important to monitor, critique and measure the effectiveness of the contemporary church in Zimbabwe in order to understand its practical relevance and the leadership thereof.

Unless the church is questioned of its complicity in the economic reality, especially the suffering of the people of Zimbabwe, there is a chance and likelihood of political parties forming and administering churches for the manipulation of the people financially, spiritually and psychologically.

The Bible is awash with instances of church leaders who have been known to blindfold and subject people to untold suffering and Zimbabwe cannot be exempted from such manipulations, especially when looking at the moral decay and economic failure that characterise the country at the moment.

In the book of Nehemiah, especially from chapter 13, we are told of the hardship that befalls the masses when there is complicit between the church and political institutions.

There is a very disturbing example of how Eliashib, the priest, was using church coffers to finance heartless politicians who would, in turn, make life hard for both people who contribute to the church treasury and the general populace.

Judging from the size of the church and its influence in terms of the numbers of people who are believed to be Christians in Zimbabwe, it should actually be an institution that is producing good citizens who become good leaders both in politics and business.

However, on the contrary, it is glaringly evident that judging from prevailing circumstances, there is the likelihood that churches are being moulded and manipulated by politicians who are then using the church as merely a religious arm and a mouth piece for maintaining the status quo and silencing the population.

Where the wild things still are: Now is the time to visit Zimbabwe

ZIMBABWE - The-economic reality of any society on earth is expressly or impliedly determined by the movement, interpretation and application of information between and among individuals and institutions across the divide.  As such, various authoritative m...
Share via
x
More Information
x