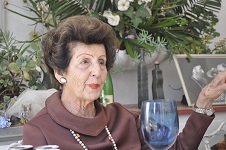 Kiki succumbed to pneumonia at the age of 90.

Speaking at her burial, Harare Provincial Affairs Minister Miriam Chikukwa said Kiki was able to fit in every situation and came up with great ideas.

“I am very pleased that the President has accorded Kiki a State assisted funeral,” she said. “This has shown that Cde Mugabe looks at what people have contributed to the development of the nation regardless of skin colour or culture.

“Kiki was interested in the empowerment of the youth. She participated in everything and supported women’s organisations as she was in the (Zanu-PF) Women’s League.”

Minister Chikukwa said by being awarded the State assisted funeral, Kiki had been given a Zimbabwean identity.

“We remember Kiki as the most inspirational, grand, warm, loving lady,” she said. “A philanthropist, a queen, a true Zimbabwean-Greek who lived her life with Ethos. Loyal friend, a mentor, a great wife, a loving mother, mother of our community.

“Kiki gave herself unconditionally to the country, our community and everyone who knew her.”

Kiki was involved in many charity works and at the time of her death was the patron of Miss Zimbabwe Trust.