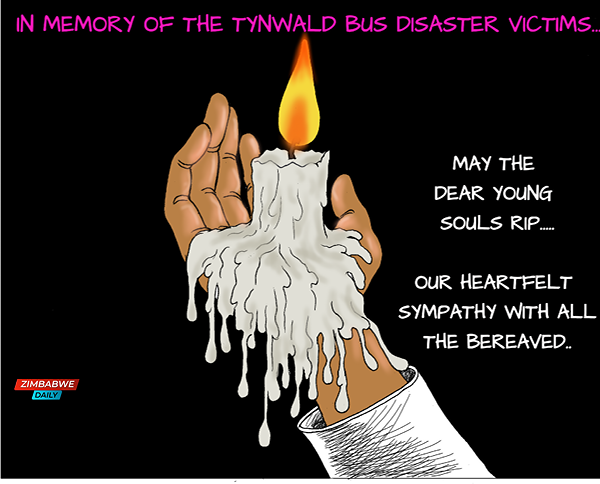 The six, who were buried side-by-side, were part of the 45 students who had gone on an educational trip to the magnificent Nyanga Mountains.

Nine are said to be in a critical state while the others continue to be attended to by doctors.

Borrowdale Road was congested from 1pm, as people snaked their way to Glen Forest Cemetery to pay their last respect.

Tents pitched for the mourners at the gravesides could not cater for even half of the people present.

“This is every parent’s worst nightmare, no parent deserves to bury their own child,” remarked one of the mourners.

It was an emotional moment for relatives, friends, church mates, students and even the media fraternity as touching experiences where shared on the unfortunate death of the young students.

Fellow classmates came in droves to bid farewell to their departed friends. Among them were some of the survivors of the horrific accident.

They stood sobbing, in front of the coffins of the six, and placed roses on each.

Floral tributes, and messages, reflected an outpouring of grief from the community of Westlea, where Tynwald High is located, and from other neighbourhoods, where the students lived.

“She did not bid farewell when she left home for the trip. I thought she would come back and we would be happy as usual, “ said Beyonce Guyo’s younger sister, who wailed helplessly as sho stared at her sister’s coffin.

Harare West MP Joanna Mamombe who was amongst the mourners was touched by the level of pain the society was in. She said,

“This is so touching no parent deserves this , l cried when  Anesu’s mother was narrating how she prayed to God for her daughter,  and  that when she called she did speak to Anesu. Imagine being the first parents to be at the scene driving from Harare and the shock of discovering her daughter had died upon admission. It could not have been easy. It is a very difficult period and I will be raising a point of privilege in Parliament concerning this sad issue. l pray the families receive healing although it takes time, l even encourage them to go for counseling “.

When the coffins were lowered down to their final resting place, mourners could not hold back their tears.

Most wept loudly after the realisation that they would never see their children and friends again.

Among the hordes of mourners were the Permanent Secretary in the Ministry of Primary and Secondary Education, Thumisang Thabela, Member of Parliament for Harare West Hon Joanna Mamombe ,  socialite Madam Boss, the famous sneaker seller known as  Magic Wacho, Pastors to mention a few.

Mourners departed from Glen Forest at 4:40pm, with lowered heads and disbelief in the amount of damage one unexpected accident would cause, and for the bereaved families, the reality of a child whose conversations ended just before that fateful field trip to Inyanga. A life ruthlessly taken away from them.

Anita Manyuka, 16, was a Form 3 student and a basketball player, while Beyonce Guyo, 15, was also in Form 3 and played volleyball.

Anesuishe Hove, 14, was in Form 2 and played football, and Kimberly Mutusva, 15, was a Form 3 hockey player.