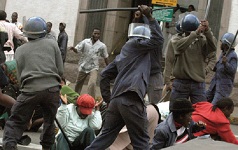 ZIMBABWE – Opposition political parties and civic society organisations have roundly condemned the use of force by police to disperse a gathering of war veterans in Harare on Thursday, saying the country was a constitutional democracy, which should uphold freedom of assembly.

Morgan Tsvangirai’s MDC-T said action by the police to suppress “a peaceful meeting” by the liberation war heroes and heroines was a “total negation of the tenets of democracy for which many of these gallant sons and daughters paid the supreme sacrifice”.

“The action by the police vindicates what the MDC has always been saying regarding the indiscriminate and illegal use of force by the police, particularly against opposition political activists, ever since the formation of our party in September 1999,” the MDC-T said in a statement.

Police on Thursday fired teargas and used water cannons to disperse a gathering of war veterans, claiming the meeting was illegal.

The former combatants had reportedly gathered to map a way forward after they were verbally battered by First Lady Grace Mugabe last Friday at a rally in Chiweshe.

Crisis in Zimbabwe Coalition (CiZC) was of the view that there should be a clear separation between personal political interests and national interests.

“We fear for the worst in terms of human rights abuses emanating from armed forces’ brutality against Zimbabwean citizens, given the current infighting within the ruling party, Zanu PF,” CiZC said.

“We implore the security services to desist from serving partisan interests as enshrined under the country’s constitution.”

The Zimbabwe Human Rights NGO Forum said it was worried by police heavy-handedness when dealing with dissent, the ever-increasing political tensions, use of hate speech and celebration of tribalism at Zanu PF rallies.

“The violent dispersal of the war veterans gathering by the police was unnecessary. There were no reports of violent expression from the war veterans which warranted this drastic approach,” the forum said in a statement, adding section 58 of the Constitution guaranteed freedom of assembly and association.

The Zimbabwe Human Rights Association said: “The assault and use of teargas canisters mirrors the undue force that the government has always employed against peaceful citizens, human rights defenders, and opposition activists exercising their right to expression, assembly and freedom of speech.”

ZIMBABWE - Opposition political parties and civic society organisations have roundly condemned the use of force by police to disperse a gathering of war veterans in Harare on Thursday, saying the country was a constitutional democracy, which should uphold ...
Share via
x
More Information