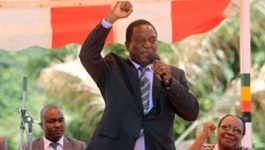 ZIMBABWE – Zimbabweans living in Chinhoyi, Mashonaland West province, have expressed mixed feelings over the security situation in the country following heightened internal conflicts in the ruling Zanu PF with factions clashing over the succession of 92 year-old President Robert Mugabe.

Some say they are now scared that Zimbabwe may plunge into a political crisis if the situation is not put under control by the party leaders.

Although the situation is calm in Chinhoyi and surrounding towns following skirmishes between war veterans and the police in Harare last week, most people who spoke to Studio 7 today said they fear that there could be some civil strife in Zimbabwe if the fighting within Zanu PF is not properly managed.

They said they are worried about President Mugabe’s moves to reprimand War Veterans Minister Christopher Mutsvangwa, who organized an ill-fated meeting of former freedom fighters in Harare which was crushed by anti-riot police, and recent outbursts by First Lady Grace Mugabe.

Mrs. Mugabe attacked Vice President Emmerson Mnangagwa for allegedly attempting to topple her husband in a succession battle that is pitting her alleged faction known as Generation 40 and Team Lacoste said to be backing Mnangagwa.

Kennias Zamhindo of Chikonohono high density suburb said it is likely that Zanu PF factionalism is triggering discord in the Zimbabwe National Army, which was accused by Mr. Mugabe at a recent Zanu PF National People’s Conference in Victoria Falls of engaging in the party’s succession battles.

Banket resident Timothy Serevano concurred, adding that the factionalism indicates that there are deep-rooted divisions in both the Zimbabwe Liberation War Veterans Association and national army over the person who is expected to succeed the president.

Serevano said such a situation is dangerous as Zimbabwe may end up degenerating into a civil war if the factionalism is not properly managed by Mr. Mugabe and other senior Zanu PF officials.

Dennis Kagonye, publisher of a community newspaper, The Mirrior, said some individuals within Zanu PF and the army will be side stepping each other in the succession battles, but the majority of people in the country will continue with their struggle for survival.

Kagonye said it is impossible for Zimbabweans to be drawn into a fully-fledged civil war because of their high level of literacy.

Local vendor, Clemence Tagarika, noted that the majority of Zimbabweans generally fear any form of violence and therefore it is unlikely that they can be pushed to the extent of rising up against the current top political leadership of the country.

Tagarika cited the crushing of the war veterans’ meeting by the police as a sure sign that the state is geared to deal with any form of rebellion.

Despite the current calm political environment in the country, some people believe that President Mugabe is no longer in control of his party, a situation that may trigger serious internal party conflicts that are likely to affect millions of Zimbabweans currently struggling to make ends meet.

ZIMBABWE - Zimbabweans living in Chinhoyi, Mashonaland West province, have expressed mixed feelings over the security situation in the country following heightened internal conflicts in the ruling Zanu PF with factions clashing over the succession of 92 ye...
Share via
x
More Information