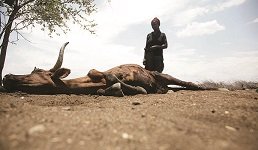 ZIMBABWE – Some years ago a friend of mine, Professor Euan Nisbet, was working on atmospheric science in the UK but comes from Mberengwa in Zimbabwe; he wrote to me and warned that Zimbabwe was likely to be one of the most affected countries in the world by climate changes caused by rising temperatures. He later said that it looked as if the Inter Tropical Convergence Zone (ITCZ) would shift northwards.

This year we have had an exceptional El Nino with high sea temperatures in the northern Pacific Ocean and we have watched as week after week the rains have stubbornly refused to move south, staying just above Lusaka in Zambia. High pressures over Madagascar have also affected our weather and often when I Googled southern Africa, Zimbabwe and South Africa were clear of any cloud cover.

The consequences are now clear. South Africa and Zimbabwe both have a 70 to 80 per cent failure of our annual crops. The region will have to import 22 to 24 million tonnes of grain and millions require help with their most basic needs – water and food. If this is not just another periodic drought then we have to start thinking about how to manage and mitigate the effects.

I have worked in agriculture all my working life and frequently I argued that we had to have mechanisms to manage drought. I would point out that southern Africa has a 40 per cent mean (average) variation in rainfall from year to year. This compares the 5 per cent in the USA grain belt and even less in Europe. If we do not maintain systems to deal with these conditions, our economy would suffer severely in times of drought.

We have three main mechanisms – water storage in dams, grain storage in silos owned and operated by the Grain Marketing Board and the Cattle Finance Scheme backed by the Cold Storage Company.

All three strategies were identified in the 30’s by the Government of the day. They adopted a number of strategies to deal with drought – three years water storage in the drier regions, a strategic grain reserve at the GMB and the capacity to handle massive upsurges in demand for cattle slaughters as well as the ability to buy cattle in large numbers for special reserve ranches or for movement to areas with grazing and water.

The policy for water storage meant that the Cities were required to build dams to hold up to three years reserve so that in dry years they could meet the needs of the urban population. On farms, special financial incentives were instituted that enabled farmers to build over 10 000 dams – nearly two dams per farm. This latter policy was backed by the “Farm Irrigation Scheme” which enabled farmers to establish the capacity to irrigate their crops when needed. In this way commercial farmers could irrigate up to 350 000 hectares of crops when they were threatened by dry conditions.

Farming in southern Africa is not easy, it’s never been easy and farmers have learned how to cope with adverse conditions – in many ways the solution to climate change remains the same as always – technology and good management. A friend said to me just this weekend that Israel gets a third of Zimbabwe’s average rainfall – we should be able to do better.

I will not dwell on the simple foolishness of the Land Reform programme implemented after the regime in power here nearly lost their grip on the State in 2000 but just to say that the capacity to manage drought on our commercial farms has been destroyed.

The grain reserve programme has been maintained by the State on paper but in reality has also been abandoned. The 700 000 tonnes of grain storage in concrete silos built before Independence are all in a poor state and most simply cannot be used. They leak, the mechanical systems used to manage the stored grain no longer works and management is very poor and corrupt. In addition the GMB is today virtually bankrupt and dysfunctional and cannot handle any serious crisis such as the one we face today.

It is the same in the cattle industry. Internationally specified export abattoirs lie empty and derelict, three out of five are just about useable but the CSC is also bankrupt and devoid of the engineering and operational skills needed to run the system. The Cattle Finance Scheme was abandoned many years ago and the reserve ranches taken over by political strong men who use them as weekend hunting reserves for themselves and their friends.

The infrastructure to handle cattle in the Tribal Areas are likewise in a poor state and the mechanisms that provided Tribal cattle owners (with 5 million cattle) a guaranteed price for whatever they sold, has collapsed with the CSC. Today on the edge of starvation in the cattle areas, cattle are being sold for $20 to $50 a head to unscrupulous buyers who are exploiting the situation.

I have argued for years now that there is no future for the cattle industry without an institution like the CSC – to no avail. Our political masters are simply disinterested in any solution that does not benefit them personally and institutionally. There are no solutions while they are in power.

More fundamentally, I ask the question, is there any solution to how we can manage our affairs and mitigate the effects of climate change if we do not look at the much needed fundamental reforms. Communal tribal tenure systems with unfetted access to land resources, has led everywhere to desertification and land degradation. In all areas of the world where individual title that is legal and secure and can be sold on the open market is not possible, deserts are growing and the human populations stagger from crisis to crisis.

We simply have no choice but to find solutions to these fundamental issues. The world is going to have to pay attention to these issues or else we will be unable to meet the needs of our people for food and water. The urgency of this is increased by climate change.

Long term demographic trends show that in the next 50 years the great majority of the world’s population will live in the Cities. The Cities drive the global economy and feeding the Cities are going to require sophisticated agriculture and careful water management. I am not sure there is any future for the small family farm – as has taken place in Europe and the USA, they will be replaced by large industrial style units of production which will use very sophisticated technologies.

Over the past two decades, Zimbabwe has been doing everything wrong and putting it right is not going to be easy, or cheap. But it can only start once we get a complete change of Government.

ZIMBABWE - Some years ago a friend of mine, Professor Euan Nisbet, was working on atmospheric science in the UK but comes from Mberengwa in Zimbabwe; he wrote to me and warned that Zimbabwe was likely to be one of the most affected countries in the world b...
Share via
x
More Information