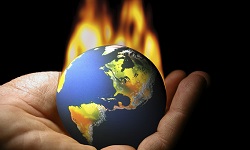 ZIMBABWE – Zimbabwe recently took commendable strides in the fight against the effects of climate change by launching its first ever National Climate Change Policy document this month.

Kudos to our climate change experts, for the country is now part of the global community of the climate change discourse. However, the launch itself was quite a milestone achievement while the implementation will be another story for days to come or never.

It is our greatest hope that the document will usher a new era and provide a new impetus in charting the path that our country is treading, carefully and gently, l presume. It is also my dearest wish that this discussion will complement what l suppose is already in the noble document. Zimbabwe has been quite unfortunate for a number of years due to its unpreparedness for natural disasters such as the Chingwizi catastrophe which is quite fresh in the minds of many. Furthermore, this document on its own will not do enough to prevent another Chingwizi scenario in any part of the country.

However, besides having the document already occupying the spaces of our national archival compartments, the road to adaptation and resilience in Zimbabwe is still littered with enormous climate barriers and challenges. As is always the case, climate change impacts will have severe effects at local levels. That is, the government and communities have to develop strategies to adapt to the changing environmental landscapes. I do sincerely believe that our government and its Ministry of Environment, Water and Climate consulted widely, not only with the experts, but above all and everything else, the vulnerable local communities who bear the brunt of climate shocks.

The climate wisdom would provide several mechanisms that promote household and community level resilience, such as community-driven developments, not top-down approaches which side-line the local voices. The local communities need a bit of funding to support their community initiatives, they do not require much, to build and secure the little they have as well as diversify livelihoods in the face of climate-related disasters. These would also fight against key limiting factors that form barriers to adaptation across communities.

Issues concerning correct poverty targeting and the correction of coherent synergies across sectors is for the government to facilitate. Rural communities can engage in short-term coping strategies that do not undermine long-term adaptive coping strategies and these should be cultivated and nurtured. Zimbabwe, like any other developing country suffers from perennial resource constraints, extreme extravagance of the little that is available as well as the sickness of patronage. The country also needs to identify community-based ecosystem adaptations and training of local communities, as the best intervention in climate policy implementation is the local-initiatives. It is the ecosystems-based adaptations that can go a long way to strengthen the community resilience of the vulnerable communities. If one takes a deeper and closer analysis into the Zimbabwean situation, can we say that communities are that empowered or will they ever be.

As a developing country, Zimbabwe’s rural people live in fragile ecosystems and are particularly vulnerable to climate change as a result of high dependence on natural resources for livelihoods. This would also become worse if the communities are barely aware that it is climate change that is consuming them, while some communities will suffer from higher exposure to climate shocks, wide spread poverty and marginalisation in their own country of birth, others suffer from information poverty and ignorance.

The building of ecosystems resilience should be complemented by community resilience. It should also be re-emphasised that people who live in hazardous, risk-prone environments and are largely dependent on natural resources for their livelihoods should be at the core of the government policy-planning. Participatory, community-based processes of decisionmaking and resource allocation should be integrated into the national framework. By so doing, it becomes systematic and sustainable rather than people living at the mercy of the government’s benevolence. Through proper channels of support, communities can embark on their own social-ecological landscape sustainable forms of adaptation through integrating their local knowledge of knowing, better known as indigenous knowledge systems into climate change adaptation.

Indigenous knowledge systems have the advantages of incorporating both science and religion, in the sense that religion is the ritual representation of the community. Indigenous stewardship ethic emerged as a result of people’s experiences and realisations that the resources they depend upon are finite, therefore, restraint needs to be exercised. Incorporating indigenous place-based knowledge into climate change discourse helps to expand the social, cultural and spiritual components of knowledge. As such, when local knowledge is explored in depth, it would not come about as the Western notion of information, but a blended knowledge of practice.

All in all, it is the government’s prerogative, together with non-governmental organisations to provide local communities with extensive training on disasters that could potentially occur in their areas and how best to prepare for them. The Chingwizi scenario is regrettable and should be managed in the manner that does not project this country as a laughing stock of the 21st Century.

ZIMBABWE - Zimbabwe recently took commendable strides in the fight against the effects of climate change by launching its first ever National Climate Change Policy document this month. Kudos to our climate change experts, for the country is now part of the...
Share via
x
More Information
x