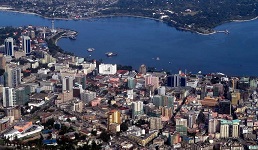 ZIMBABWE – companies in Zimbabwe should tap into the Tanzanian market to boost their sales in the face of a contracting economy, the country’s export promotions body, ZimTrade has said.

Zimbabwe’s construction sector is reeling from severe effects of the prevailing liquidity crunch with major projects being suspended over lack of funding, resulting in diminishing revenues.

However, ZimTrade said the Tanzanian construction industry, which has seen a period of sustained growth since 2002 as a result of government support, increased infrastructure development and significant diplomatic and commercial partnerships with the Chinese government and private sector companies, could bail them out.

“These developments present a huge opportunity for Zimbabwe building material suppliers to tap into the market. Zimbabwe is a manufacturer of quality building materials that are already exported into the regional markets,” ZimTrade said.

“However, statistics on the trade map show that Zimbabwe has not been a supplier to the Tanzanian market since 2012. Companies have an opportunity to tap into the market utilising the Sadc trade protocol that confers preferential treatment to Zimbabwean products.”

A trade map provides trade statistics on export performance, international demand, alternative markets and competitive markets, as well as a directory of importing and exporting companies. It covers 220 countries and territories.

ZimTrade said major projects that are currently underway include construction and rehabilitation of roads, bridges, ports, power generation plants (following the completion of the construction of a gas pipeline from Mtwara to Dar-es-Salaam), shopping malls, warehousing and storage facilities, factories, skyscrapers and hospitals.

“These projects have contributed significantly to the surging demand for building materials in Tanzania. The government of Tanzania is also making great effort to eliminate urban slums and provide decent housing for all,” it said.

According to Trademap, Tanzania imports building material products such as treated wooden poles; steel construction products like piping and tubing, door and window frames and equipment for scaffolding.

Tanzania’s imports of building material in 2010 stood at $20 million increasing five fold to $97 million in 2014, reflecting the level of activity in the sector, according to Trademap.

Major supplying markets of building material to Tanzania are China, Norway, South Africa, Uganda and Kenya, among others.

ZimTrade said Zimbabwean companies interested in exploring the market could consider participating in the BuildExpo Africa, an exhibition focused on the construction sector.

The event takes place in Dar-es-Salaam from July 2 to 4 this year.

ZimTrade said it would be undertaking a market survey in Tanzania this year to identify trade and investment opportunities.

ZIMBABWE - companies in Zimbabwe should tap into the Tanzanian market to boost their sales in the face of a contracting economy, the country’s export promotions body, ZimTrade has said. Zimbabwe’s construction sector is reeling from severe effects of t...
Share via
x
More Information
x