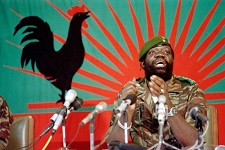 ZIMBABWE – Following reports that the family of former Unita rebel leader Jonas Savimbi are suing over his “outrageous” portrayal in a video game (see 12:18 post), we’ve taken a closer look at his role in Call of Duty: Black Ops II.

Savimbi features in a level of the game called “Pyrrhic victory”, where he leads Unita forces in a fictional battle against MPLA fighters in 1986.

In the game, Savimbi urges his men forward on the battlefield, shouting:

At the end of the level, Savimbi’s character can be heard laughing and boasting about how many MPLA fighters have been killed.

The game uses the real-life historical involvement of the CIA in Angola, who supported Savimbi’s rebels, as a premise for its own fictional universe.

Etienne Kowalski, a lawyer for the game’s publisher Activision Blizzard, said Savimbi is represented “for who he was… a character of Angolan history, a guerrilla chief who fought the MPLA”, AFP news agency reports.

Mr Kowalski said the video game shows Savimbi in a “rather favourable light” as a “good guy who comes to help the heroes”.

I told Mugabe to go to 10 years ago, says Dabengwa