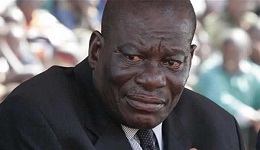 ZIMBABWE – Harare City Council has given acting town clerk Josephine Ncube until February next year to implement the resolution to name one of the roads in Harare after the late decorated army general, Solomon Mujuru. in recognition of the “sterling work” he did in liberating the country.

The ultimatum came amid enquiries by stakeholders on what had happened to a 2012 resolution to honour eminent Zimbabweans who played critical roles in their respective areas.

Council’s environment committee chairperson Herbert Gomba was yesterday fuming, saying there was no way management at Town House could sit on a resolution for years, insisting it should be implemented immediately.

“The resolution is still there. It’s a standing resolution and I will direct the (acting) town clerk [Ncube] to implement that,” he said.

“We should be seen to be rewarding people who would have made a contribution to our lives as a city and as a country. We can’t be seen not implementing our own resolutions.
“People like Mujuru sacrificed their lives for the liberation of this country and we have people like [former University of Zimbabwe vice-chancellor Walter] Kamba, who dedicated their lives in their respective fields for the good of the country.”

The suggestion was that Enterprise Road be named after Mujuru, while Rotten Row would be renamed after Dumbutshena and Churchill Road was to bear Kamba’s name.

Dumbutshena, who died at the turn of the millennium, was the first black Chief Justice in independent Zimbabwe, described as highly professional.

Kamba is cited as a prominent lawyer, first black Vice-Chancellor of UZ and one of the few blacks to practice in the then Rhodesia.

“It is long overdue. We have nothing to do with the politics in other parties. We need results on the matter and will ensure this happens by February,” Gomba said.

Council recently received a request from the Zanu PF-affiliated Youth Against Poverty to rename Borrowdale Road after First Lady Grace Mugabe, but Gomba immediately said the chances of such an honour were slim, as she did not meet the requirements.

Husband sell his metrimonial property to get seperate from wife

ZIMBABWE - Harare City Council has given acting town clerk Josephine Ncube until February next year to implement the resolution to name one of the roads in Harare after the late decorated army general, Solomon Mujuru. in recognition of the “sterling work...
Share via
x
More Information
x