ZIMBABWE – Harare City Council is embroiled in a bitter wrangle with the Zimbabwe Revenue Authority (Zimra) after the revenue authority demanded an upward review of the subsisting payment plan of $1 million per month following its refusal to waive a 100 percent penalty charge for late payment.

The city is now seeking the intervention of the Ministry of Local Government, Public Waorks and National Housing.

According to recent minutes of the Finance and Development Committee, finance director Mr Justin Mandizha reported that council was not meeting its monthly obligation due to cash flow challenges.

“The monthly payment as per the subsisting payment plan amounted to $1 million per month and Zimra was demanding an upward review to address the ballooning debt.

The underpayment continued to attract interest and penalty charges at the prescribed rate and at 100 percent respectively.

“Council had made an appeal for waiver of the 100 percent penalty charge and this was not granted. Zimra was yet to renew the City of Harare Tax Certificate,” read part of the minutes.

In view of the challenges, council is seeking the intervention of its parent ministry to find common ground between the parties.

Council noted that remittances to Zimra are by way of direct transfers, set offs of amounts owed to council by Government and in some cases garnishee orders.

It also noted that arising from the Government directive to write off all domestic debts accrued to June 30, 2013, an amount of $13,7m was approved for write-off by Zimra against a claim of $21,7 million.

The city collected $138 million from January to September 2015.

Mr Mandizha reported that the prevailing economic challenges had affected most Harare residents and the corresponding revenue inflows.

He also sought council permission to hire 31 vehicles for a period of four months for use in revenue collection after reporting that council’s fleet had outlived its useful economic life and some divisions were struggling to deliver their mandate.

Council granted him the authority. 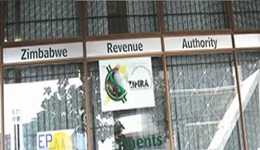 ZIMBABWE - Harare City Council is embroiled in a bitter wrangle with the Zimbabwe Revenue Authority (Zimra) after the revenue authority demanded an upward review of the subsisting payment plan of $1 million per month following its refusal to waive a 100 pe...
Share via
x
More Information
x