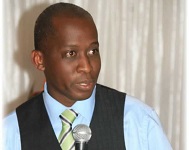 ZIMBABWE – Harare East National Assembly member Terence Mukupe must be arrested and answer to charges of instigating violence against the police by youths in Mabvuku recently, a magistrate said yesterday.

“No one of the accused conducted themselves violently. The violence which State said was done the ‘Boko Harare’ style was incited by the honourable Member of Parliament,” said Mr Mapfumo.

“It is the court’s view that the police should arrest him than make these accused suffer for his iniquities.

“There is no basis to deny the accused bail; they are of fixed aboard and have no travelling documents. The charge of criminal trespass they are facing attracts a fine or a short sentence.”

The magistrate granted $50 bail each to the seven party members.

They were ordered off the land they had invaded and to report every Friday to ZRP Mabvuku.

Mukupe allegedly led a group of youths who besieged Mabvuku Police Station where they demanded the release of fellow members arrested for invading land belonging to the City of Harare, but leased to Shelter Zimbabwe.

It is alleged that Mukupe ordered the officer-in-charge of Mabvuku Police Station to take off his uniform if he wanted to be a politician.

They were charged under the Criminal Law Codification and Reform Act for criminal trespass.

They were represented by Mr Kudzai Kadzere.

Prosecutor Mr Michael Reza alleged that on August 3, the youths invaded an open space in New Tafara and erected cabins.

They also apportioned the land among themselves and planted billboards indicating they had taken over the area.

They threatened violence against the police and Shelter Zimbabwe.

They were later arrested.

Can Mujuru cause an upset in Zimbabwe politics?