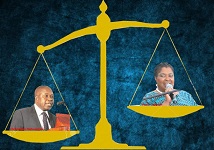 ZIMBABWE – The High Court has barred Manicaland Provincial Affairs Minister Mandiitawepi Chimene and some other war veterans from masquerading as the interim or substantive leaders of the Zimbabwe National Liberation War Veterans’ Association.

This followed a public announcement by Minister Chimene on February 12 this year that she had taken over the leadership of ZNLWVA as its new chairperson.

Minister Chimene also announced that a vote of no confidence had been passed against ZNLWVA chairman Cde Christopher Mutsvangwa and two other executives, Cdes Headman Moyo and Victor Matemadanda.

The judge made the ruling yesterday in an urgent matter in which ZNLWVA, led by Cde Mutsvangwa, was challenging Minister Chimene’s interference in the running of the association’s business.

“Pending finalisation of this matter, the applicant is granted the following relief:

“Respondent and any other persons acting through her are hereby interdicted from holding themselves out as the interim or substantive leaders of the Zimbabwe National Liberation War Veterans’ Association.”

However, the court is yet to confirm the final order sought, that Cdes Mutsvangwa, Matemadanda and Moyo were legitimately elected members of the association’s national executive.

In the interim, the executive led by Cde Mutsvangwa remains in control pending confirmation of the final order.

Minister Chimene has 10 days to oppose the same order, if she so wishes.

Cde Mutsvangwa, in his founding affidavit, said his executive was still in charge of the association and that Minister Chimene’s Press statements were reckless.

“Since then (February 12), respondent has been making Press statements calling herself and other unidentified war veterans as the legitimate leaders of the applicant.

“The latest of the Press statements is contained in the Herald newspaper of 17 February 2016 wherein respondent is quoted as saying I am under suspension and that she would lead the interim executive as its chairperson.

“It is my firm belief that respondent’s statements to the Press are quite reckless in view of the fact that applicant’s leadership is still extant and fully in control.”

Cde Mutsvangwa said in terms of the association’s constitution, an executive member can only vacate office if he or she resigns, if he or she is expelled at a special conference and if he or she misses three consecutive meetings of the committee without excuse.

Of all the three stated reasons cited above, Cde Mutsvangwa said, none apply to his case or those of other “suspended” executives.

“There is therefore no legal basis upon which respondent can claim to have taken over applicant’s leadership when no elective congress has been held,” said Cde Mutsvangwa.

In any event, Cde Mutsvangwa said, the association’s constitution does not provide for a “vote of no confidence” and in fact the principle was alien to ZNLWVA.

I worked hard for Ungrateful Mujuru to be VP – Grace