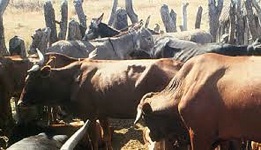 Police dismissed reports going round that the cow was returning to its owner after being stolen.

“The owner of the cow Langton Manyika of Plot 20 Charmwood Farm in Centenary came to the police station and his ownership was verified and the beast was not stolen.

“Police Anti-Stock Theft section team notified veterinary services officials and declared that the beast was unfit for consumption due to wounds.

“They killed the cow believed to have fallen from a moving vehicle and destroyed the meat,” said Assistant Inspector Dube.

The wounded cow drew the attention of motorists during the peak hour as it walked by the side of Hebert Chitepo Avenue before turning into Sam Nujoma Street.

“I was on way to drop my wife at Girls High School where she is a teacher and I could not follow the cow but what irked me was its discipline to walk by the side of the flowing traffic,” said one of the motorists.

“I only managed to capture the photograph since I was behind time to drop my wife and how the owner failed to pick it after falling on his moving vehicle since it had a wound by its thigh still remain as my question,” he added.

Another motorist suspected juju saying the cow was walking as if it was being led by an unseen person.

“Nyaya yemombe iyi yatishamisa, ndiyo yangairinyaya pama service stations as motorists questioned its discipline in walking by the side of flowing traffic as if someone was guiding it,” said the motorist.

“I want to believe someone invisible was leading it back to its place and I do not think there is anyone who reported stolen or missing stock in Harare,” added the motorist.

H-Metro sought comment from Zimbabwe Traditional Healers Association (ZINATHA) president George Kandiero who reiterated that there are Africans with a tradition to own charms that protect their property.

“Confessing helps much in some circumstances where thieves and robbers end up mentally disturbed or suffering from sicknesses that cannot be healed due to such issues.

We have people who come from Mt Darwin, Karoi, Chipinge and Nyanga to mention a few where reports of such charms are heard of,” said Kandiero.

ZIMBABWE - The wounded cow found along Hebert Chitepo Avenue last Thursday was identified, killed and its meat destroyed by veterinary services. Police dismissed reports going round that the cow was returning to its owner after being stolen. Harare provin...
Share via
x
More Information