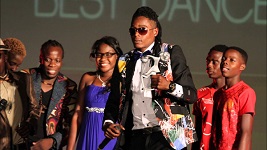 ZIMBABWE – The chanter will be launching his album Dai Hupenyu Hwaitengwa along with his wife Bounty Lisa who will also be launching hers.

A number of artistes according to Jah Love’s camp have been invited, including Kinna, Killer T, Dhadza D and many other dancehall artistes.

Soul Jah Love reportedly refused to include Calaz on the list following his diss on the Back In Town Riddim Ndakatadza Kutamba Navo which Jah Love felt was a diss directed at him.

“We will be launching the albums on February 13 at the Mbare Netball Complex, one for Jah Love and the other for Bounty Lisa. We have invited a number of artistes such as Killer T, Kinna, Dadza D and others.

“Calaz was not invited following his song which Jah Love felt was a diss to him,” Conquering manager Wadis said.

Soul Jah Love reportedly does not hold anything against Calaz but feels he went off line.

“Soul Jah Love does not hate Calaz but he was just shocked by the development at a time when he thinks they were on a recovery path. Maybe they are just jealous or it is their strategy to diss but we are not moved. Soul Jah Love was named the best Zimdancehall artiste recently and maybe they are not happy with it,” he said.

Jah Love camp said they have other special invites hoping to have the likes of Jah Prayzah and Beverly Sibanda on the day.

He said he is hoping to have a DVD launch on the day to accompany the albums, having done a video for his late mother.

ZIMBABWE - The chanter will be launching his album Dai Hupenyu Hwaitengwa along with his wife Bounty Lisa who will also be launching hers. A number of artistes according to Jah Love’s camp have been invited, including Kinna, Killer T, Dhadza D and many o...
Share via
x
More Information