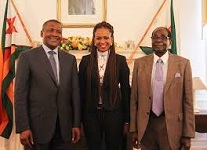 ZIMBABWE – The Zimbabwe Investment Authority (ZIA) has said it is ready to process proposed investments by Nigerian billionaire Aliko Dangote while analysts added that the tycon’s deals presented a litmus test on the country’s ability to handle business opportunities.Last week, Dangote — Africa’s richest man with a net worth of $17,5 billion, according to Forbes Magazine — announced an interest in mega investments in Zimbabwe. He pointed at energy, cement manufacturing and coal mining as areas his company had laid eyes on.

This would be a major boost for the country which desperately needs to attract foreign direct investment (FDI) inflows to revive the economy.

ZIA board chairman Nigel Chanakira told Standardbusiness that the authority had reduced the cost and time of the Dangote investment.

“We are ready, we can process in two days,” Chanakira said.

He said ZIA welcomed investors who came “whichever way”, adding that the most important “is if they come, let’s capture them”.

Zimbabwe is ranked lowly on the ease of doing business at 171 out of 180 countries, according to a latest ranking.

Chanakira said ZIA was working with its counterparts, Doing Business Reforms and had dealt with soft issue.

“We have reduced the time and cost of investment,” he said.

However, Dangote did not meet officials from the Environment, Water and Climate ministry, with sources saying his team would meet all the stakeholders, including the environment ministry next week.
Dangote’s proposed projects require environment impact assessments which can take up to a month, insiders said last week.

The Nigerian tycoon told journalists last week that government had promised to accelerate the process to enable his group to get permits and start the projects.

Analysts said Zimbabwe should create a favourable investment climate to attract investors to the country.

Economist Godfrey Kanyenze said Zimbabwe should not be excited about one investor but should create a business environment conducive for investment.

He said government should also be concerned about local investors and “the rate at which we have been allowing companies to close”.

“The economy has bottomed out and now there is very limited downside risk whilst the upside potential is unlimited,” he said.

Muponda said Zimbabwe offered clear investment opportunities, especially as it gave hard currency returns and had limited competition due to the liquidity crisis.

“In addition, shrewd investors always target crises markets where they know the risk may be high but the rewards even higher. Experienced investors do not go with popular trends but employ sound analysis to select investment areas and I think government should do more to invite other African investors and encourage this trend which comes soon after another billionaire of Ugandan origin invested in BancABC,” he said.

Concerns have been raised on government’s sincerity to attract investors after Indian investor Essar failed to conclude the acquisition of Zisco due to infighting in government.

In 2011, Indian firm Essar agreed to buy Zisco in a deal worth $750 million. The Indian firm also agreed to take over Zisco’s debt. Four years on, the deal is yet to be concluded.

But Muponda said the Zisco-Essar issue “is unique as it relates to buying a state enterprise and that’s bound to be delayed and at times cancelled due to the nature of how privatisation works.”

It also has bulk cement import or export terminals in Port Harcourt and Lagos in Nigeria.

The Dangote Group is also into sugar and salt refining, flour and semolina milling, and noodles and pasta manufacturing among others.

Zimbabwe has been trailing regional neighbours in terms of FDI inflows as potential investors cite policy inconsistencies and threats caused by the empowerment legislation.

The legislation stipulates that at least 51% of all companies operating in the country should be in the hands of locals.

Last year, Zimbabwe recorded FDI inflows of $545 million, the highest since 2009. Yet the inflows were insignificant compared to South Africa ($5,7 billion), Mozambique ($4,9 billion) and Zambia ($2,4 billion).

Dangote deals: A test for Zimbabwe

ZIMBABWE - The Zimbabwe Investment Authority (ZIA) has said it is ready to process proposed investments by Nigerian billionaire Aliko Dangote while analysts added that the tycon’s deals presented a litmus test on the country’s ability to handle busines...
Share via
x
More Information
x