ZIMBABWE – The daughter of Zimbabwe’s Higher Education Minister Jonathan Moyo was found dead in her apartment in Cape Town, South Africa, Saturday morning. Zanele Moyo was a 20-year-old student at the University of Cape Town, and school officials confirmed her death Sunday.

“Moyo … was found dead in her private, off-campus flat on Saturday morning,” University of Cape Town representative Gerda Kruger said in a statement cited by  News24 in South Africa. “The cause of death has not been confirmed.”

Moyo was in her second year at the university, where she was studying political science, international relations and gender studies. An autopsy and police investigation into her death is under way.

Gods people my angel daughter Zanele is no more.

A source who spoke on condition of anonymity apparently told New Zimbabwe that Moyo’s daughter suffered from depression and that she may have committed suicide.

“She was found by a friend who had knocked her door repeatedly but did not get any response,” the source told Zimbabwe’s weekly tabloid newspaper Sunday. “The death was only discovered when a locksmith was summoned to come and open the door. The body was found at 11.30 a.m. [local time]; she suffered from depression, and depression is a very serious disease by the way. It can drive people in to self-harm.”

A member of the ruling ZANU-PF party, Jonathan Moyo has been a controversial figure in Zimbabwean politics. He has been criticized for allegedly frivolous spending and flip-flopping on his views of President Robert Mugabe’s government. Last month, Moyo received death threats over his reported attempts to block Vice President Emmerson Mnangagwa’s ambitious efforts to succeed Mugabe. 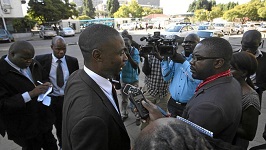