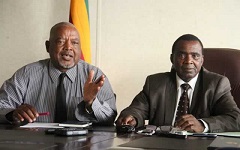 ZIMBABWE – Government is investigating the authenticity of letters that reportedly emanated from its offices and the Civil Aviation Authority of Zimbabwe (CAAZ) authorising Nyikavanhu Housing Co-operative to build houses on land earmarked for the expansion of Harare International Airport.

This comes after several Government officials were sucked into the Arlington Estate saga where Harare City Council is demolishing houses built on “unauthorised” land.

Responding to questions on the legality of the settlement and authenticity of documents in The Herald’s possession at a Press conference yesterday, Secretary for Local Government, Public Works and National Housing Engineer George Mlilo said he was still to get a briefing from the officials implicated.

“We are looking into the matter with a view to establishing the authenticity of those letters. I will be getting in touch with the officials who are said to have issued the documents. With the advancement in technology, you cannot tell whether the documents are fake or original,” he said.

According to a letter reportedly written by Harare provincial administrator Mr Alfred Tome dated April 4, 2013 to Nyikavanhu Housing Co-operative, that clearly indicates that it originated from his office, complete with a date stamp, the land was legally offered to the cooperative for housing development.

Mr Tome has however, since distanced himself from the letter.

CAAZ, in a letter written by acting director of airports Ms Priscilla Mawire, cleared the subdivision of the farm for residential stands.

Ms Mawire has now also distanced herself from the letter.

The ministry’s Deputy Minister Cde Christopher Chingosho said Government was concerned with the sprouting of illegal settlements and the resultant demolitions.

“As a ministry, we are striving to facilitate the provision of decent and affordable housing to the populace. In this regard, we have created a conducive environment through flexible policies for every actor to participate in human settlement development. We want to bring back sanity in the housing delivery sector as we work towards reducing the huge national housing backlog,” he said.

“Government has instituted a moratorium on all land allocations to so-called land developers as policy. We shall be utilizing the Urban Development Corporation for all developments on State land,” he said.

He said local authorities had been directed to ensure their development control units played an active role in enforcing the law in terms of their by-laws.

He urged actors involved in the production of residential layout plans and subsequent approvals to quicken the process to avoid the emergence of illegal structures on yet-to-be-planned residential land.

“In the same vein, let me warn the planning fraternity to desist from producing layout plans for individuals who do not provide proof of ownership of the land they wish to build on.

“We will not hesitate to advocate for the de-registration and prosecution of all those found to be doing so as they create an avenue for the fleecing of unsuspecting members of public,” he said.

An estimated 60 houses were demolished in a bid to bring order to the Arlington area.

Most of the residents of Arlington have since moved to Stoneridge where a re-allocation exercise has been put in place by Government.

A section of residents have however opted to stay in Arlington claiming they have been purposefully overlooked while some residents say they cannot move to Stoneridge because of financial challenges.

Other residents claim the re-allocation process has been marred by corruption through double allocations.

ZIMBABWE - Government is investigating the authenticity of letters that reportedly emanated from its offices and the Civil Aviation Authority of Zimbabwe (CAAZ) authorising Nyikavanhu Housing Co-operative to build houses on land earmarked for the expansion...
Share via
x
More Information