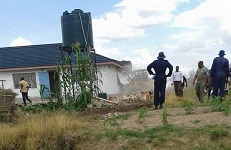 ZIMBABWE – Government and local authorities have been barred from resorting to self-help and demolishing residents’ properties without obtaining a court order.

Granting an urgent application by Arlington Estate residents, High Court judge Justice Priscilla Chigumba said even if the structures are illegal in terms of council regulations, due process of the law must be followed.

The judge blasted Harare City Council and the Minister of Local Government, Public Works and National Housing Saviour Kasukuwere for taking the law into their own hands for demolishing the structures in violation of the people’s right to administrative justice as enshrined under Section 68 of the Constitution.

“Under no circumstances are the Government departments at liberty to demolish any structures in the absence of a court order authorising them to do so, whether the structures are illegal or an eyesore.

“The unlawful conduct of the respondents of demolishing the applicants’ houses without notice and without a court order was deplorable and not justifiable in a democratic society.

“This is a democratic society in which such conduct, especially on the part of Government departments, whose operations are funded by taxpayers’ money, is not justifiable.

“For the avoidance of doubt, and in the spirit of guiding future conduct by these Government departments, the notice of intention to evict must be in writing, not given verbally at a meeting held under a tree.

“Notice must give those likely to be affected sufficient time within which to relocate.

“If this is not complied with, then the eviction and demolition will be unconstitutional,” ruled Justice Chigumba.

Justice Chigumba said although demolitions had already been done, the affected residents could sue the negligent Government departments who left them building on land which was not meant for residential purposes.

“Certain remedies may be available to the applicants flowing from the unconstitutionality of such conduct.

“Applicants may have remedies against the negligence of certain Government departments in failing to protect them from the actions of omissions of Nyikavanhu Housing Cooperative, when they knew that the cooperative was continuing to allocate and take cash from the members of the public, for stands on Arlington Estate when it no longer had the mandate to do so,” Justice Chigumba said.

The judge also advised the residents to sue Nyikavanhu Housing Cooperative for damages.

“The first and second respondents be and are hereby prohibited from further destruction of the applicants’ property without a court order.

“The first and second respondents shall pay the costs of suit on a legal practitioner-client scale,” ruled Justice Chigumba.

Council, without any notice or court order went on to raze down the members’ houses and evicted the occupants on January 21 2016.

The affected residents then filed an urgent chamber application at the High Court to stop the demolitions and eviction, and to bar any further demolitions and harassment.

However, the court judgment came out after the whole settlement had been razed down.