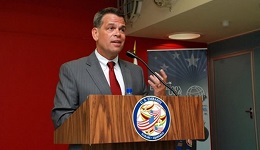 825Views
0 Shares Share on Facebook Share on Twitter
ZIMBABWE – Outgoing United States Ambassador to Zimbabwe is not turning his back on Zimbabwe as he assumes a senior post in the State Department Bureau of African Affairs with direct responsibility over United States missions in sub Saharan African states. This, however, will not see a robust policy shift in U.S. – Zimbabwe relations with the veteran diplomat opting to focus on African hotspots and internal refocusing at the State Department’s Bureau of African Affairs.

“I can’t just turn my back and forget this country but I will make a conscious effort to pull away from Zimbabwe in order to give my successor time and space to come and meet various Zimbabweans of all walks of life like you and reach his own opinion,” said Ambassador Wharton during a roundtable discussion with journalists in Harare on Thursday.

Ambassador Wharton is concluding his term in Zimbabwe and is taking up as Principal Deputy Assistant Secretary in the State Department Bureau of African Affairs.

He will oversee policy implementation across 49 diplomatic missions in sub-Saharan Africa. The career diplomat spent seven years of his diplomatic career in Zimbabwe having served in Zimbabwe from 1999 to 2003 as Public Affairs Officer. This represents over a third of his overseas time in the Foreign Service, he said.

Commenting on his impending role in the State Department, Wharton said he will continue to focus on current and emerging crises points in the African continent as well as internal restructuring designed to ensure the State Department is better prepared to handle emergencies.

“I am going to have to divide my attention, and one of the facts of the matter is that places in crisis like the Central African Republic, South Sudan, and the Ebola outbreak in West Africa last year consumed an enormous amount of energy from the Bureau of African Affairs. So to some extent I anticipate being captive to and trying to respond well to emergencies but internally part of my job in Washington will be to try to complete a reorganization that has been done so that we are better able to anticipate emergencies and crises.”

He described his second term in Zimbabwe as positive characterized by increased dialogue between his office and Zimbabwe officials and expressed optimism on the economic future of Zimbabwe despite continuing U.S. concerns about lack of respect for human rights and the rule of law.

“We do recognize improvements in the human rights situation in Zimbabwe, thank goodness the elections of 2013 were peaceful, it’s a huge step forward and we are willing to give Zimbabwe credit on those improvements. But then you get a case like Itai Dzamara which makes everybody remember again how tough things were during the elections of 2002 and 2008 and Murambatsvina in 2005,” said Wharton.

Speaking on the travel and economic restrictions imposed on 106 individuals and 69 entities responsible for retrogressive policies, Ambassador Wharton said since he started his term the number of individuals on the targeted sanctions list had reduced.

He explained the Zimbabwe Democracy and Economic Recovery Act (ZDERA), as distinct for travel restrictions imposed by the Executive Order reviewed annually by the White House, noting that recent U.S. policy was supportive of economic reforms in Zimbabwe.

“ZDERA instructs the U.S. representative to the international financial institutions to support debt relief and new lending facilities for Zimbabwe at such time as the government of Zimbabwe has taken steps to restore the rule of law, property rights as well as respect for human rights,” said Wharton.

He added: “If you look at the track record of U.S. economic financial policy towards Zimbabwe in the last 12 months, first of all we have supported the IMF staff monitoring program here and secondly at the big meeting in Lima we didn’t bang our shoe and say no! no! a thousand times no!, we were supportive of that as well.”

According to the IMF, the Staff Monitoring Program is seen as a crucial tool in building a strong track record toward normalizing Zimbabwe’s relationship with creditors, mobilizing development partners’ support, and for supporting macroeconomic policies and laying the foundation for addressing the southern African country’s deep seated structural issues.”

Zimbabwe’s debt clearing strategy was supported by its creditors in Lima, Peru during the annual meetings of the International Monetary Fund and the World Bank in October 2015. According to reports, Zimbabwe intends to clear its arrears to the three multinational institutions, the IMF, ($110 million), the World Bank ($1,15 billion) and the AfDB ($601 million) by the end of April 2016.

President Barack Obama has nominated Harry K. Thomas Jr. who has pledged to continue the United States’ “deep and abiding concern for Zimbabwe.”

“There is no more explicit expression of our support for the people of Zimbabwe than our standing by them through their times of greatest need,” Ambassador Thomas Jr. told a Senate Foreign Relations Committee hearing on last month.

“Zimbabwe can and should be a nation of economic opportunities, of respect for the rule of law and the human rights of all people. Those are values that reflect the core of what Americans share with Zimbabweans and that we should pursue together,” he said.